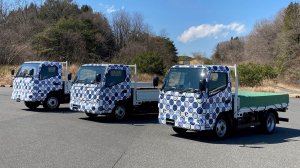 As the vehicle is still going through the homologation process, no test units have yet been allocated to a specific Fuso customer. However, two e-Canters are being prepared for testing in South Africa, she notes.

“The exact launch date for the South African market is not yet confirmed,” adds Gerber.

The company is currently proceeding with the development and testing of the next generation eCanter, in preparation for the vehicle’s upcoming launch.

This mass production model will be made available with further upgrades in terms of range and safety features, and will be offered with an expanded lineup of variations to meet diverse transportation needs, promises MFTBC.

The truck is being tested under severe conditions in hot and cold climates, both in Japan and abroad.

Driving tests surpassing a total distance of a million kilometres will be completed by the time of the official launch.

To date more than 350 electric Canters have been introduced to markets in Japan, Europe, the US, Australia and New Zealand, where they have collectively covered a distance of more than 4.5-million kilometres worldwide through daily operations.

MFTBC earlier announced plans to electrify all of its new models for the Japanese market by 2039, and to accelerate its shift to carbon neutrality.