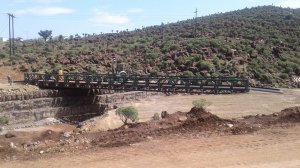 The Department of Public Works and Infrastructure (DPWI) says a bridge has been delivered in a rural community in the Eastern Cape.

The bridge was completed in recent weeks as a critical infrastructure project in the Bilatye community in the Chris Hani district municipality.

The bridge was installed as part of the Welisizwe programme, through which the DPWI works with the Department of Defence (DoD) and government departments in the relevant provinces to build bridges in rural areas where communities have for years not had safe access to amenities such as schools and jobs.

This project is as a result of a longstanding memorandum of agreement between the DPWI and the DoD for the installation of military-type bailey bridges within the country.

The DPWI is in discussions with the South African National Defence Force to ensure that the department speeds up the turn-around time for delivery of the much needed bridges.

The DPWI provides coordination and programme management for the implementation of the Welisizwe programme. Since the inception of the programme, 24 bridges have been built − 23 in the Eastern Cape and one in Gauteng.

Another four bridges are also currently being built.

Apart from bringing much-needed improved access to communities in need, these projects also have an economic benefit to the local community, notes the department.

During the installation of the Bilatye bridge, 40 Expanded Public Works Programme participants from the surrounding communities were employed. Moreover, three local companies benefitted from the project by providing construction material.

The new bridge will also especially benefit pupils from the Mfanta High School which was closed because parents were afraid of children having to cross the river during the rainy seasons.