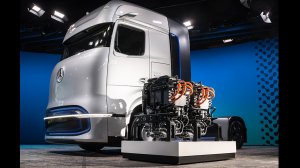 The GenH2 Truck is aimed at the long-haul transport market and marks the beginning of commercial fuel-cell drive development for the German truck maker.

The company aims to start customer trials in 2023, with series production scheduled for the second half of the decade.

The GenH2 Truck is set to have the capabilities of a conventional Mercedes-Benz Actros long-haul truck with regard to traction, range, and performance.

It will have a gross vehicle weight of 40 t and a payload of 25 t, while it will also be able to travel 1 000 km on a single tank of hydrogen.

It is thanks to the use of liquid instead of gaseous hydrogen, with its higher energy density, that the vehicle’s performance is planned to equal that of a comparable conventional diesel truck, says Daimler Trucks research, development, procurement and China region board member Sven Ennerst.

The tanks used in a fuel-cell truck using liquid hydrogen are much smaller and, owing to the lower pressure, significantly lighter. This gives the trucks a larger cargo space and higher payload weight, he notes.

At the same time, more hydrogen can be carried, which significantly increases the truck’s range.

All of this should make the series GenH2 Truck, like conventional diesel trucks, suitable for multiday, difficult to plan, long-haul transport, says Ennerst.

The storage of cryogenic liquid hydrogen at –253 ˚C is already common practice in stationary applications, for example in industry or at hydrogen filling stations, he adds.

This also applies to the transport of liquid hydrogen as cargo.

The two stainless-steel liquid-hydrogen tanks intended for the series version of the GenH2 Truck will have a storage capacity of 80 kg (40 kg each) for covering long distances.

The stainless-steel tank system consists of two tubes, one within the other, that are connected to each other and vacuum-insulated.

In the series version of the GenH2 Truck, the fuel-cell system is to supply 2 x 150 kW and the battery is to provide an additional 400 kW temporarily.

At 70 kWh, the storage capacity of the battery is relatively low, as it is not intended to meet energy needs, but mainly to be switched on to provide situational power support for the fuel cell, for example during peak loads while accelerating or while driving uphill fully loaded.

It is to be recharged in series-production vehicles with braking energy and excess fuel-cell energy.

A core element of the operating strategy of the fuel-cell and battery system is a cooling and heating system that keeps all components at the ideal operating temperature, thus ensuring maximum durability.

Daimler Trucks plans to have the eActros LongHaul ready for series production in 2024.

The range on one battery charge will be about 500 km.

Also in Daimler Trucks’ alternative drive arsenal is the Mercedes-Benz eActros for the distribution market, which was already presented in 2018 and has been tested intensively since then by customers in everyday transport operations.

The company says it will start series production of this purely battery-powered heavy-duty truck next year and that the range of the series-produced eActros on one battery charge will significantly exceed that of the prototype’s roughly 200 km.

Daimler Trucks says it is pursuing similar vehicle schedules for the North American and Japanese markets as it is for Europe.

By 2022, Daimler Trucks’ portfolio in its main sales regions – Europe, the US and Japan – will already include series-produced vehicles with battery-electric drive.

The company also has the ambition to offer only new carbon dioxide-neutral vehicles in these three market by 2039, says Ennerst.

A new worldwide modular platform architecture – the ePowertrain – will be the technological basis of all medium- and heavy-duty carbon-neutral, all-electric series-produced trucks from Daimler Trucks, whether powered purely by batteries or by hydrogen-based fuel cells, with the goal of achieving the necessary synergies and economies of scale.

“This combination enables us to offer our customers the best vehicle options, depending on the application, says Daimler Trucks chairperson Martin Daum.

“Battery power will be rather used for lower cargo weights and for shorter distances. Fuel-cell power will tend to be the preferred option for heavier loads and longer distances.”

Where Does This Leave South Africa?
Daimler will still have diesel trucks available to markets outside Europe, North America and Japan post-2039, says Ennerst.

He says it will not be possible to pursue an ideology of 100% carbon neutral vehicle production, as there “will be lots of parts of the world that will use diesel”.

“Some markets cannot follow this transition at the same speed, so we’ll still have lots of diesel-operated trucks available.”