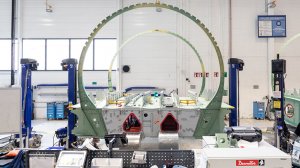 The first centre wing box (CWB) for the Airbus A321XLR has been delivered to Hamburg, Germany, from Nantes, France, where it was assembled. The A321XLR is the latest version of the A320neo (for new engine option) family, a new-generation development of the company’s A320 single-aisle airliner family. XLR stands for extra long range, and the A321XLR will be the world’s longest-ranged single-aisle airliner.

The Airbus facility at Nantes specialises in the production of CWBs, which form the structural ‘heart’ of an airframe. “The CWB is always the first major component on each new aircraft development to be produced so we must mature its design very early and manage its interdependencies with fuel systems, load calculations, as well as physical interfaces to the airframe aerostructure components developed in France, Germany and the UK,” jointly explained Integrated Product Team Nose & Forward Fuselage A321XLR programme leader Yannick Valette and CWB project leader Richard Hue.

Because the A321XLR will have a greater maximum takeoff weight than any other version of the A320neo family, key components of the CWB have had to be reinforced. These include the upper and lower panels as well as spars and frames. To achieve its great range (of up to 4 700 nautical miles), the A321XLR will be fitted with a rear centre fuselage fuel tank (RCT), which required the addition of fuel system components to the CWB. In all, more than 200 modifications have been made to the A321XLR CWB, compared to the CWBs of the other A321neo models.

The CWB was delivered to Hamburg by an Airbus Beluga transport aircraft. The Belugas were specifically developed to move large aircraft components between the various Airbus plants in Western Europe.

In Hamburg, the CWB will be, along with what is called Section 15 (which is the RCT flange-module), integrated into the forward part of the centre-aft fuselage of the aircraft. This will mark the start of the assembly of the major components of the first A321XLR on the dedicated H260 pilot final assembly line.

Meanwhile, in Nantes, assembly of the next two CWBs has started. These will also be for flight test development aircraft. Assembly of the CWB for the first A321XLR for delivery to a customer should start during the last quarter of this year. The entry into commercial service of the A321XLR is scheduled for 2023.