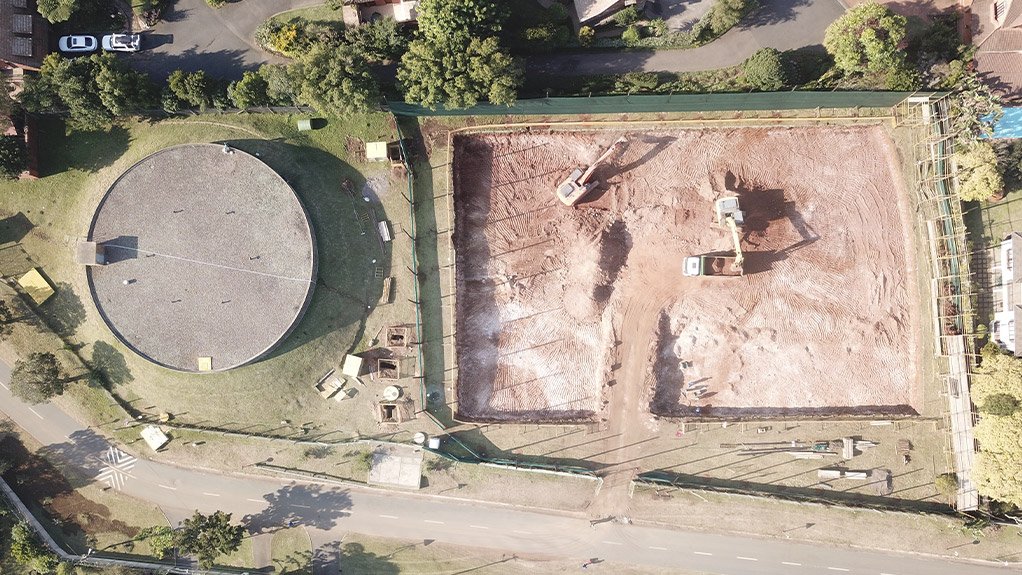 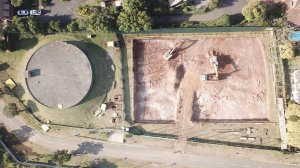 Consulting engineers Knight Piésold completed the design and construction supervision of the 25 ML rectangular reinforced concrete reservoir at the Emoyeni site for the eThekwini municipality Water and Sanitation Unit in February 2021.

Knight Piésold lead engineer Kendall Slater explains that the project represents creative design elements that exceeded the expectations of both the client and the community.

Despite the challenges that were faced during the project, the Knight Piésold team was able to successfully overcome these using innovative solutions, he explains.

“The Covid-19 pandemic resulted in the temporary closure of the project during the first lockdown period in South Africa in March 2020. This delayed the construction by three months. Once the operation resumed, strict safety protocols were implemented to ensure the safe continuity of the operation, which also resulting in a further delay to the overall duration set for the completion of the project.”

To mitigate any further delays, Slater says that construction company Afrostructures proposed that the 8-m-high walls be poured in a single lift as opposed to the normal two lifts.

“Although an innovative feature of construction, there were, however various concerns with this technique, including that the fines and aggregate would separate in such a high drop, and that achieving the correct vibration at the lower levels would be difficult,” says Slater.

To mitigate this, a pumped concrete mix, in combination with tremie pipes to avoid separation, was used. Furthermore, vibrating shutters at the lower levels, in conjunction with needle poker vibrators to achieve adequate compaction of the concrete were also used.

“The finished concrete was of a high quality, with zero spalling and once a trial panel was successful, the rest of the walls were poured using this same technique with excellent results,” says Slater.

Furthermore, the existing water storage system at the site had to be maintained throughout the duration of the contract.

“In order to keep the existing storage system live throughout the construction period, two separate compartments were constructed, so that the old reservoir could continue to operate while compartment one was being constructed,” explains Slater.

Slater says the traditional method in the design of a large concrete reservoir was to use several movement joints to allow for     the shrinkage and expansion of the concrete. These joints are sealed using rubber water bars across the joint.

However, any errors or movement of the water bars during the concrete pours would result in the water tightness being compromised, consequently resulting in leaks, which Slater says is the case in many existing reservoirs in South Africa.

While the use of construction joints is inevitable for a large concrete structure, such as a reservoir, special consideration was given to this part of the construction process, with the monitoring and quality control of these joints scrutinised carefully.

Knight Piésold ultimately decided on a different approach, which was to remove the majority of the movement joints. This decision, however, required careful modelling.

It also meant that construction joints were still required, but the specification on these was given careful consideration and was closely monitored during construction.

The removal of joints resulted in an increase in the quantity of reinforcing steel to mitigate cracking but the additional cost was offset against the savings in water bars, the shorter construction period and the lower risk of leakage.

Furthermore, the previously used tapered wall width was changed to uniform walls. “The modelling of the structure showed that the uniform walls performed better as a propped cantilever with a smaller crack width, and this also made the reinforcing designs at the corners simpler and easier to construct, explains Slater.

These design changes resulted in a structure that was commissioned with zero leaks and a high quality of concrete, he adds.

Slater explains that one of the success stories of this project was the level of engagement undertaken with the community and relevant stakeholders.

The reservoir is located in a  residential suburb, and therefore,  noise, dust pollution and traffic congestion were a concern to residents.

“The requirements and concerns of the local residents were considered early in the project’s life, and stakeholder engagement meetings were initiated at least one-year prior to the start of construction. Conceptual designs were also presented to the community by the professional team with constructive discussions taking place between all parties.”