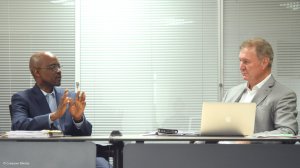 JOHANNESBURG (miningweekly.com) - Coal mining company Exxaro Resources, which sees modernisation and innovation as imperatives, will this year announce new partnerships to ensure that it remains sustainably competitive going into the future.

"We're not going to be farmers, but we are going to be able to come up with platforms that can facilitate a new agri economy," said Exxaro CEO Mxolisi Mgojo, whose black-led company owns vast tracts of unutilised land.

"If you just look at their drive in South Africa by the Chamber of Mines of South Africa around some of the imperatives for mining to continue being sustainable into the future, the whole thing about modernisation - which basically talks to innovation - becomes an imperative for us to remain competitive, and also to start exploiting those mine assets and resources, which we could not do in the past because of the safety issues.

"We see it as an imperative, and over a period of time we'll bring in these tools and technologies and embed them into our whole business, and not only the operations, to ensure that we can drive productivity levels and derive the cost benefits," says Mgojo, who is also the president of the Chamber of Mines of South Africa.

Coal and technology are two different drives for the company. While it has a strongly growing mining business underpinned by coal, it is seizing on to new business opportunities that have the potential to create new revenue streams.

"We've got a lot of land, by the way, for example. But this land is not being utilised. Currently the country has got the whole issue about land that is just sitting there not being utilised and the big issue in South Africa is how do you take that land and actually start in a positive way to transform that land as part of a whole new agri economy that can be created.

"These are the things that we started to think about long time ago and to actively play into that space," he told Mining Weekly Online.

The new political environment that takes South Africa away from the abyss, also calls on all South Africans to help place the country on a growth trajectory that addresses the disparities of inequality and abject poverty and high youth unemployment.

"When you start looking at all these things, it is almost requested of us by the State President, to say join me in actually addressing these issues," said Mgojo, who warned that failure to do so could create a force against current businesses.

"We're very positive about playing a role as Exxaro," he says, adding that it includes being part of the Yes youth employment services initiative as well as using the company's enterprise supply development strategy to create new opportunities for the youth that will contribute to the economy.

Mgojo described the improved relationship with Eskom as being like "a breath of fresh air".

"You can recall that we've not had the best of relationships with Eskom as their biggest supplier of coal, but today we're talking," he said in describing Eskom's new board as "very credible" and made up of good business people.

Under acting Eskom CEO Phakamani Hadebe, a clean-up was under way while steps were being taken to bring in a new CEO and new CFO.

"We're beginning to have a good dialogue. For the first time I even have a CEO of Eskom willing to come and have coffee with me in my office. I don't even have to go to them.

"I think that is very, very positive and it's setting a new tone. And the truth of the matter is that Eskom's in trouble in terms of coal because there is a shortage of coal. We're there to be able to support Eskom in whatever ways that we can," Mgojo added.