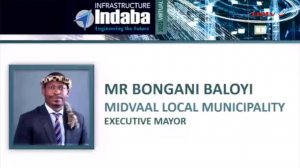 Midvaal Local Municipality executive mayor Bongani Baloyi outlines the relationship between engineering and politics, and how this must be managed.

There are a number of issues concerning the country that Business Unity South Africa (Busa) is currently tacking, CEO Cas Coovadia said during the Consulting Engineers South Africa (Cesa) Infrastructure Indaba 2021, on September 28.

Firstly, there is the issue of economic recovery. Coovadia said Busa was clear on the need for repositioning the economy, so that it is inclusive and that the majority have a stake in it.

He noted that Busa was pushing for more bilateral meetings with the Presidency with the aim of finding solutions to the economic challenges facing the country.

Secondly, there is issue of enhancing localisation, which is being promoted considerably by the Department of Trade, Industry and Competition, said Coovadia.

He said Busa and Business Leadership South Africa had commissioned a study, which was undertaken by Intellidex, which showed that there are certain areas of the economy, and some specific product areas, where it is possible to increase manufacturing and bolster localisation.

Coovadia said these low hanging fruits were there, and that, provided the regulatory environment was in place, local manufacturing could be enhanced, which would provide jobs.

He noted that, as an example, South Africa had imported the majority of personal protective equipment during the early part of the pandemic last year. Since then, local manufacturing capacity has been developed and there are now upwards of 20 small to medium-sized enterprises that manufacture about 90% of what is needed for the country.

Thirdly, there is the issue of relooking at the labour composition of boards of companies. Coovadia said Busa agreed with government that this was not the right time to tinker with this, as there are other, bigger considerable economic and social problems that require addressing first.

However, it was an issue that would have to be addressed in future.

Fourthly, there is the issue of the national health insurance. While this is in the health field, Coovadia said its impact would be felt across the economy.

While Busa is of the view that equitable healthcare for everybody is a priority, Coovadia emphasised that this must be done in way that includes both the private and public sector.

While the private sector does not serve the majority, it does work well in its own capacity, and this must not be destroyed, he stated.

Busa has made detailed submission to government and provided details on what part of the Bill must be amended to enable private public interaction to use the best capacity available across both of these to provide equitable healthcare, and allow choices for citizen, he said.

Busa would continue to engage with government on this, Coovadia indicated.

The fifth issue is that of climate change, with the country having made certain commitments to moving away from fossil fuels to greener forms of energy.

Coovadia emphasised that, in aiming to meet these, a just transition pathway must be pursued, to ensure that the communities and employees that are dependent on fossil fuels – which is the majority in South Africa – are not negatively impacted as greener forms of energy are phased in.

He also said Busa was very clear in that it wants developed countries that committed to assist with funding and capacity, to enable developing countries to broaden their mitigation efforts and transition to new forms of energy. “Funds need to flow,” Coovadia emphasised.

The sixth issue concerns the vaccine rollout, with Busa having mobilised about 40 professional to assist government with this, on a pro bono basis.

Coovadia said the vaccine supply problem had been solved, and now, there was a demand problem instead, with many South Africans wary to take the vaccine.

He said Busa was working with the government to encourage an uptake; and that the President was set to announce a vaccine weekend soon, where sites in key areas would be open for a weekend.

Lastly, there is the issue of infrastructure. Coovadia said Busa had been interacting with Infrastructure South Africa, and providing capacity to help it manage some of the work it does.

He noted that one of the problems is that there is a considerable number of infrastructure projects, and no progress is being made on any of them. Therefore, Busa is calling for four of five major, critical growth generating projects to be pursued, with government support and private sector participation, and bringing in the necessary expertise from across the public and private sectors to get these projects going.

Also, he indicated the need to address backlogs in rebuilding the construction industry. This required intervention on matters such as the ‘construction mafia’, and ethical employment, with discussions ongoing around these areas.