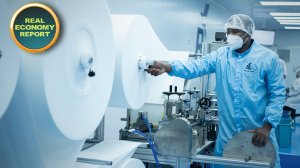 BT Industrial’s electrostatic melt-blown fabric is currently being used to produce FFP2 medical-grade face masks, keeping up with the PPE demand due to Covid-19 and the standard demand that hospitals have for high-quality, locally made masks.

BT Industrial’s face masks feature a proprietary five-layer fabric design and have been found to be on par, if not better in some instances, than what global competitors offer in terms of filtration efficiency and low breathing resistance.

The facility can produce up to 1.7-million of these masks in a month.

MD Kgomotso Lekola tells us how the company has evolved since its establishment over the last four years and its rationale behind entering the medical industry.

From the company’s establishment in 2017, it has grown to employ more than 100 people and operate the two distinct manufacturing capabilities at its site in Germiston.

BT Industrial is in the process of getting its CE mark, which is the European Union’s mandatory conformity marking for regulating goods sold within the European Economic Area.

quality testing and research laboratories this year, which can be leveraged once the company ventures into more niche areas of medical device manufacturing for the international market in due course.

Lekola tells us about the company’s expansion plans.