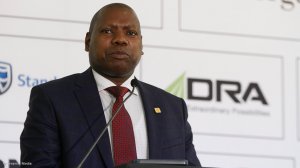 JOHANNESBURG (miningweekly.com) – The majority call by the Joburg Indaba for government to replace Mineral Resources Minister Mosebenzi Zwane with a new Minister would be communicated to the African National Congress (ANC), which was committed to facilitating an enabling environment for the South African mining industry, ANC treasurer general and former KwaZulu-Natal premier Dr Zweli Mkhize said on Wednesday.

Mkhize was delivering the opening keynote address on the first day of the fifth Joburg Indaba conference following the controversial Minister going on a charm offensive the day before as the main speaker at the Joburg Indaba gala dinner.

Despite all the offers of cooperation made by the errant Minister, Joburg Indaba attendees gave the Minister a firm thumbs down during the indaba’s traditional digital voting session, even after Joburg Indaba chairperson Bernard Swanepoel said he would respond to his gala dinner invitation for mining to put forward suggestions to improve the industry.

Mkhize noted the belief of the majority of attendees that the mining industry needed to be led by a new Minerals Minister and he undertook to carry that message to the ANC, which he declared to be available to help facilitate the resolution of a number of these issues.

Mkhize said the ANC viewed the mining industry as one that still had a long future as well as the capacity to build the South African economy as a whole.

He noted that mining is an industry that makes an important contribution to the improvement of the lives of many rural people, and is also a major earner of foreign exchange, on which South Africa is dependent.

The focus of ANC engagements with the chamber had been on the rebuilding of the industry and restoring of investor confidence to ensure mining sector growth.

South Africa as a global leader in platinum and manganese also needed to leverage off its endowments to maximise job creation and stimulate local manufacture.