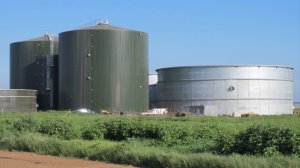 Watch a time-lapse video of the construction of the Bronkhorstspruit biogas power plant. Source: Bosch Projects.

After several years of navigating project-threatening red tape and currency fluctuations, the 4.4 MW Bronkhorstspruit biogas power plant, which will supply clean energy to a leading automotive manufacturer in Gauteng, is expected to enter production before June.

Outlining the project’s development at a South African Independent Power Producer Association gathering on Tuesday, Bio2Watt CEO Sean Thomas reported that progress had been far more challenging than he had envisaged when leaving South African Breweries in 2007 to pursue the venture.

However, all the elements were now in place for what could become a benchmark waste-to-electricity independent power producer (IPP) for South Africa and a potential forerunner to Bio2Watt’s aspiration of producing more than 50 MW of green energy in South Africa within ten years. The company was currently pursuing a second commercial biogas project on a dairy farm in Malmesbury, in the Western Cape.

Besides the difficulties associated with securing the necessary licencing approvals in a context where the rules for using the existing grid to sell power to a remote commercial offtaker were still ill-defined, Thomas said that currency fluctuations and South Africa’s environmental regime had proved key project hurdles.

Between securing a key Industrial Development Corporation (IDC) loan in March 2013 and project financial close in February 2014, the rand/euro exchange rate had moved from around R11.70 to the euro to around R15; a development that would have sunk the project had it not been for direct government support.

Securing the environmental approvals was not only time consuming, but also challenging, owing to the novelty of the technology and an approval system that made few allowances for project size or its potential environmental spin-offs.

Crucially, Thomas won support for the project within the Tshwane municipality, which facilitated the project securing a much-prized licence to ‘wheel’, or transport, power produced by the plant through the municipal network to BMW South Africa’s Rosslyn factory.

Equally important was a willingness by BMW to pay a premium for the clean electricity produced, in return for price-path certainty covering about 25% of its electricity needs for the ten-year duration of the power purchase agreement.

Notwithstanding strong goodwill towards the development, the legal documentation associated with the development still ran to over 1 500 pages, while Thomas reported that its legal fees had been R8-million, against an initial budget of R2-million.

Located adjacent to a cattle feedlot on a farm near Bronkhorstspruit, east of Pretoria, the key raw material is the manure generated from the 20 000 head of cattle and 12 000 sheep on the property. But because a total of 300 t of material is required daily, supplementary feedstock (in the form of chicken abattoir waste, ice-cream waste, food sludge, fruit and vegetable waste and paper recycling sludge) had also been secured.

The project was being built by multidisciplinary consulting engineering and project management company Bosch Projects, which has an exclusive licence agreement for the ComBigaS technology, developed in Denmark.

Bosch Projects renewable-energy director Butch Carr reported that the development was being pursued as a turnkey project, with Bosch supplying the complete plan and associated infrastructure. Its sister company Bosch Munitech had been awarded a five-year contract to operate and maintain the facility, while Bosch Holdings, the parent company, had even taken an equity position. Other backers included the IDC and the Norwegian development financier, Norfund.

The thermophilic anaerobic digestion process would produce biogas with 55% to 65% methane, while the plant consisted of two parallel digester lines with primary and secondary digesters in each and 35 days retention times. Spent solid and liquid material contains nitrogen and phosphorus, which will be sold as a fertiliser.

The fuel produced would be used in four 1.15 MW GC170-12 Caterpillar gas engines with generators, with space reserved for two additional engines and another digester line to potentially increase capacity to over 6 MW. A new 13 km power line would be built to the Eskom substation, with the capacity to export up to 10 MW.

Carr reported that, besides stringent design approvals by local authorities and Eskom, gainign permission from landowners for way leaves had proved a major challenge.

Thomas said that Bio2Watt would continue to pursure prospects outside of the Renewable Energy Independent Power Producer Procurement Programme bidding rounds until the prices for biogas projects “were right” – the initial prices outlined were 96c/kWh.