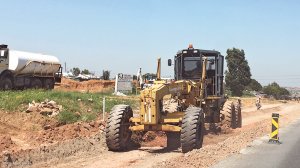 The second-quarter (Q2) Afrimat Construction Index (ACI) has dropped sharply on the back of the national lockdown regulations imposed between April and June to deal with the Covid-19 pandemic.

The ACI is a composite index of activity within the building and construction sector, compiled by economist Dr Roelof Botha on behalf of Afrimat.

Prior to the Covid-19 pandemic, the sector had been battling with low levels of business confidence, high interest rates, declining levels of public sector expenditure on infrastructure and lethargic economic growth.

When the lockdown came, the sector temporarily almost ground to a halt, with April recording insignificant levels of activity for every key indicator relating to construction.

The ACI, therefore, dropped to well below the 100 level (representing the base period for the index), which also occurred during the first quarter, when the ACI dropped to below 100 for the first time.

Gross domestic product (GDP) figures for the second quarter released by Statistics South Africa on September 8 indicate that construction fared the worst of all economic sectors, declining by more than 30% compared with the same period last year (at current prices).

For the economy as a whole, the nominal decline in GDP amounted to 14.8% (year-on-year).

Fortunately, however, the systematic easing of lockdown regulations has led to a V-shaped recovery for most key sectors of the economy, most notably retail trade sales by general dealers, which were already 2% higher in June than the same month a year earlier (at current prices), states the Q2 ACI report.

The same trend holds true for retail sales by hardware stores, which recorded year-on-year growth of 4% during June.

The volume of building materials produced nevertheless remained subdued throughout the second quarter, and is only expected to show a meaningful recovery during the third quarter of the year, notes the ACI report.

“Contractors and builders are obviously under huge pressure to catch up on lost construction time and the imminent further relaxation of lockdown regulations could pave the way for a bumper fourth quarter for the construction sector.

“Overtime work will also be facilitated by the return of the summer. During December, the interior of the country enjoys almost 14 hours of daylight.”

Botha stresses that the ACI’s trend for the second quarter is abnormal, and should not be mistaken for a likely future trend.

Construction Boosters
Botha notes that a number of potentially strong growth drivers have started to emerge in the aftermath of the worst stages of the pandemic and that these promise to boost construction activity during the rest of the year and into next year.

Lending rates have dropped to their lowest level in several decades and, if sustained, will lower the cost of capital formation over the next couple of years.

Arguably the most important tangible driver of recovery in construction is the infrastructure drive by government, which will be implemented in close cooperation with the private sector.

During a briefing at the end of July the head of the Presidency’s Investment and Infrastructure Office, Dr Kgosientsho Ramokgopa, announced that details of 51 infrastructure projects had been gazetted.

These projects have been declared strategically important and will be fast-tracked to secure the necessary approvals (including municipal rezoning and water rights) by the end of September.

This means that work on the projects should start before the end of October, or at the very least tenders should have been issued in this time, says Botha.

An amount of R340-billion has been earmarked for these projects and the necessary sovereign guarantees and approvals for increased borrowing have already been secured, while funding has been agreed with private sector banks and development organisations.

“Construction is the most labour-intensive sector in the economy and the high priority that has been assigned to affordable housing projects has the potential to re-energise a pervasive supply chain that is not reliant on imports, with value being added by domestic businesses," says Botha.

He is confident that the construction sector has already started to lay the foundations for an exceptionally strong performance during the second half of the year and that the macroeconomic dividends from National Treasury’s new growth plan will become visible in 2021.

Afrimat CEO Andries van Heerden believes that this bodes well for the recovery of the South African economy post Covid-19.

“We are ready for the infrastructure projects to roll out and remain hopeful that government will act speedily on this for the sake of the people of South Africa.”