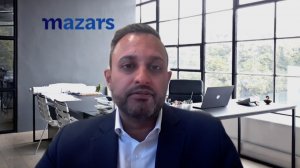 In early 2020, Mazars decided to initiate the new barometer to assess the views of C-suite leaders around the world on their activities and outlook for the coming year, and to understand how they manage and prioritise short- and long-term initiatives.

The barometer is a comprehensive report of business executives’ views and outlook for 2021, based on insights from 540 C-suite leaders around the world.

As the data was captured during the early part of the pandemic, it also provided an insight into how international business leaders were responding to the situation.

Overall, the research shows a surprising level of optimism among the C-suite, reports Mazars.

The report compared Africa with other regions, including Latin America, Asia-Pacific, Western Europe, Russia, North America, China and the UK.

Of those African C-suite executive surveyed, 77% said they expect business growth in this year, which exceeded the global average of 71%.

This positive outlook is a global phenomenon given the significant business challenges facing South African and African companies, exacerbated by the Covid-19 pandemic.

Despite navigating a turbulent economic environment, Africa, and particularly South Africa, is in fact poised for growth, despite the region already having faced recession before the onset of the pandemic.

“What many don’t realise is that South Africa was already in recession before Covid-19, so there was an expectation for growth regardless.

"However, the speed of that growth surprised us – from commodities to telecoms and agriculture, we’re seeing South Africa make a substantial rebound,” Mazars South Africa co-CEO Anoop Ninan said during a webinar on August 4 to unpack the barometer’s findings.

As a region, Africa showed marked differentiation from other regions, including Asia-Pacific, Western Europe and North America, in that it was the only region in the world to demonstrate a short-term oriented corporate strategy as opposed to one orientated to the longer term.

Short-term-oriented activities were characterised in the report as actions that primarily have an impact within one year.

In South Africa, specifically, 54% of respondents are investing more time, money and other resources in addressing short-term concerns.

This finding contrasts starkly with findings for the rest of the world – which was reported to have made the transition from short-term concerns to long-term investment.

This includes investment in new products, services or markets; information technology maintenance and security; and digitising operations or processes.

According to the barometer, 81% of African C-suites surveyed said they expect the biggest transformation in coming years to be tech-related.

Moreover, 30% predicted that there is a 75% or higher likelihood that their organisation will go through a tech transformation during the next three to five years.

Also speaking during the webinar was Mazars South Africa co-CEO Michelle Olckers, who said that while this aligned with global trends in technology and innovation, it was surprising given the considerable strides that needed to be made in these sectors across the continent, when compared with more developed regions.

According to the report, a third of South Africans surveyed predicted that it was more than 75% likely that their organisation would go through a cultural transformation during the next three to five years.

An area of concern highlighted by the report is that 86% of businesses in Africa have a male majority of decision-makers, making Africa the second-least gender-equal region in the world, with Asia-Pacific being the most unequal.

“The call for cultural transformation goes hand-in-hand with issues around gender equality, which is part and parcel of the need for the workplace to become more integrated and more representative of the population,” emphasised Olckers.

“As a woman in a senior C-suite executive position, it is clear to me personally that we have a long way to go in South Africa. What does give me hope, however, is the reality that Africa has one of the highest percentages of female entrepreneurs in the world. Perhaps we need to look at gender equality a bit more holistically to get a fuller sense of where we are,” she added.

Despite growing global optimism around the future of businesses, the overwhelming majority of local executives surveyed stated that they were concerned about how economic trends would affect their operations.

When juxtaposed with their concern about factors such as climate risk and geopolitical trends, it is clear that, for South African business, the state of the economy is the greatest determinant of institutional change.

At least for now, the most pressing concern for South African business leaders is economic recovery and finding a way to mitigate the effects of the pandemic.