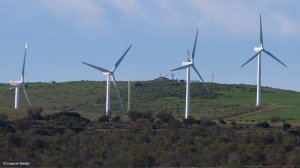 The overall capacity of all wind turbines installed worldwide by the end of 2017 reached 539 291 MW, preliminary statistics published by World Wind Energy Association (WWEA) has shown.

A WWEA report, released on Monday, further showed that 52 552 MW of wind energy capacity were added last year, slightly more than in 2016 when 51 402 MW went online.

This is the third-largest number ever installed within one year, after the record years of 2014 and 2015.

However, the yearly growth rate of only 10.8% was the lowest growth ever since the industrial deployment of wind turbines started.

All wind turbines installed by the end of 2017 can supply more than 5% of the global electricity demand. For many countries, wind power has become a pillar in their strategies to phase out fossil and nuclear energy.

In 2017, Denmark set a new world record with 43% of its power coming from wind. An increasing number of countries have reached a double-digit wind power share, including Germany, Ireland, Portugal, Spain, Sweden and Uruguay.

By far largest wind power market, China, installed an additional capacity of 19 GW of wind energy capacity last year, slightly less than in 2016, and it continues its undisputed position as the world's wind power leader, with a cumulated wind capacity of 188 GW.

Of the leading markets, the US, Germany, India, the UK, Brazil and France all recorded strong growth.

However, some of the major markets, in Europe, in particular, faced stagnation.

At the same time, the new installation record in Germany and in some other European markets is rather the result of an anticipated market collapse, owing to the switch from feed-in tariffs to auctions, which has been imposed by the European Commission and creates major difficulties in particular for small and medium-sized investors.

WWEA secretary-general Stefan Gsänger noted that the general, robust growth of wind power around the world, which went hand in hand with further geographic diversification was encouraging, adding that new world regions, including Latin America and Africa, are playing an important role in this dynamic development.

"Obviously, many governments have understood that wind power brings great benefits to their societies, as it is emission-free, cheap, domestic and accessible and offers a very attractive pathway to achieving the Paris Agreement.

"However, signs of weakness in particular in Europe are a matter of concern. The European Union and its member States should urgently reinforce their efforts to deploy wind power as part of an overall renewable-energy strategy and to work out a roadmap for a 100% renewable energy future," Gsänger highlighted.