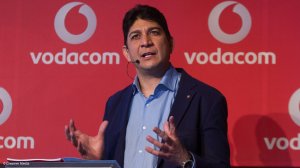 JSE-listed Vodacom has ended the year to March 31 with strong customer growth, increased revenue and earnings and increased traffic on its network.

Vodacom’s group revenue increased 4.8% to R90.7-billion, with group service revenue up 5% to R73.3-billion during the financial year under review.

“An improved second half performance in South Africa and the sustained growth of our international businesses contributed to the group’s 8.9% increase in headline earnings per share (HEPS) to 945c and a dividend return of 845c to shareholders,” said Vodacom CEO Shameel Joosub.

The company’s earnings a share increased 7.7% to 939c apiece.

Earnings before interest, tax, depreciation and amortisation (Ebitda) increased 11.6% to R37.6-billion during the year under review.

This comes as Vodacom adds 5.9-million customers, bringing its total customer base, including Safaricom, to 116-million, highlighting a year characterised by strong customer growth.

“Despite deteriorating economic pressures and the proactive price cuts to our out-of-bundle rates, South Africa service revenue grew 2.3% to R52.7-billion, with data use elasticity supporting recovery to growth in the second half.

Vodacom’s revenue from its financial services business increased 21.5% to R2-billion, on the back of offerings such as airtime advance, insurance and VodaPay services.

“Our digital services business has also produced solid growth, contributing R1.5-billion in revenues on the back of increasing purchases of our video-on-demand offering and our music, sports, gaming and other video services,” he added.

“It has been another stellar year for our international portfolio, where we recorded margin expansion for a second year, and further diversifies our currency exposure from the South African rand,” Joosub pointed out.

Vodacom’s investment in Safaricom delivered a 30.4% boost in profits, with growth bolstered by currency factors and inclusion of the new M-Pesa joint venture.

“Significant investments in network and infrastructure, an acceleration in pricing transformation and a 17.2% underlying increase in revenue from M-Pesa, all contributed to Safaricom’s success,” he said.

The M-Pesa ecosystem now processes more than $14.7-billion a month in transactions through the platform, with 40-million customers transacting on M-Pesa across all Vodacom’s operations, generating total revenue of R16.2-billion and growing at 22% a year.