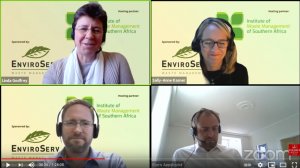 Although they agreed that the concept of a circular economy was not new in South Africa, a panel of experts participating in a webinar hosted by Creamer Media this week, also agreed that more needed to be done by government to expand on the implementation of circular economy principles to produce a the desired effect of closing the loop on waste leakage.

Jewaskiewitz noted that the circular economy was a topic of discussion generating a lot of interest in the waste industry currently, and that South Africa was in the midst of a waste crisis, having been there for “some time” already.

“Our landfills are filling up rapidly, many of them poorly managed and over capacity. With such a small quantum of the vast quantities of waste generated being diverted from disposal, there is no doubt in my mind that we have to take and make a serious and rapid change to how we do things, while also being able to manage the transition appropriately, however long that might take,” he said.

Appelqvist noted, however, that there was still no common understanding of the circular economy, with a multitude of definitions and ideas on the topic.

He explained that there were different areas of understanding of what a circular economy is, going from it being solely that of recycling under a “new flag”, to ideas grasping the system of reforming financial systems and the way people produce and consume.

Nonetheless, Appelqvist said the fundamentals of a circular economy involve reducing resource leakage and keeping the value of products and materials in a closed-loop system for as long as possible, and at as high a level of saturation as possible.

He added that an ideal circular economy was also that which reduced its energy use and extracted less raw materials.

Godfrey, meanwhile, said the concepts of a circular economy had been creeping into South Africa’s policy landscape over time, with the first reference being a mention in a White Paper on Science, Technology and Innovation that was published in 2019.

This mention was soon followed by the third National Waste Management Strategy of 2020 and an appearance in the recent mandatory Extended Producer Responsibility regulations, which were released earlier this year.

As such, Godfrey said one feasible definition of a circular economy was one built on sustainable resource management – a concept which she says is appearing in the new master plans for growth being solicited by the Department Trade, Industry and Competition, of which a number are under development.

“Some of the circular economy thinking actually extends all the way back to the first national Waste Management Strategy of 1999 – the basic concepts regarding waste prevention, the waste hierarchy within the narrow waste context. So yes, it has appeared in the South African policy landscape,” she pointed out.

However, Godfrey said that although it was great to have mentions of a circular economy in South African policy, it was important for the government to start translating policy into action.

In this regard, she noted that the third national Waste Management Strategy of 2020 was “definitely saying a lot of the right things” regarding South Africa’s transition to a more circular economy”.

But, she said, South Africa could not drive Pillar 1 without Pillars 2 and 3, with Pillar 2 being around waste services (collection).

“You cannot drive a circular economy if you are not collecting the waste and if you do not have basic service delivery,” Godfrey said.

Importantly, she noted that Pillar 3, which involves compliance and enforcement, was key to supporting the concept of a circular economy.

She stated that even if the “greatest regulation and legislation” was on paper, it meant nothing if not enforced, leading to goals not being achieved.

“A fundamental issue around Pillar 3 is the issue of awareness and, in this regard, there is so much more that needs to be done in South Africa to change consumer behaviour and raise awareness,” Godfrey noted.