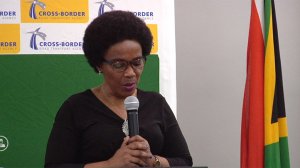 Speaking at the Cross-Border Road Transport Agency Indaba, in Pretoria, on Wednesday, the Minister highlighted regional economic integration as an “essential mechanism” when it comes to connecting Africans at an economic, social and cultural level.

Chikunga highlighted the uniqueness of the African Union’s Linking Africa Plan, adding that it seeks to answer questions beyond the physical barriers that are constraining continental integration.

“The Linking Africa Plan [appreciates] that transporting persons, goods and services from one country to another requires adherence and compliance with the rules, regulations, standards and requirements of the various countries that embody the continent’s different regions,” highlighted Chikunga.

With this in mind, she noted that several joint committee meetings held between South Africa and neighbouring countries revealed the consensus that operators within the Southern African Development Community feel that overly burdensome regulation can create barriers to cross-border investment and trade, as does the absence of a clear, transparent regulatory environment.

“Regulation of cross-border transport is a propeller of, and not an obstacle to, enhanced regional trade and growth of cross-border trade and business. This point is strongly supported by engagements we have held with South African transport operators and other industry players, and it is supported by other literature compiled from independent studies conducted by other development institutions.”

Chikunga added that inconsistent and flippant regulatory practices, such as regulatory authorities that are constantly changing rules and procedures without due process, and without requisite consultation with their cross-border counterparts and industry players, was a challenge.

With this in mind, she noted, governments needed to consider regulation as key when it comes to influencing private investors’ decisions on whether to invest in the markets that the continent seeks to promote.

“Private-sector companies hold the view that regulatory visibility enables them to plan, predict, adjust and anticipate, as they make investment decisions.

“The absence of regulatory certainty makes it difficult for private companies to invest in environments in which it is not possible to develop predictable business plans, or where it is almost impossible to anticipate what could happen next, because of the flippant manner in which regulatory frameworks are altered, without due regard to regulatory impact assessments,” she concluded.