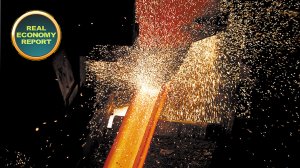 Sashnee Moodley:
There are some signs of life at the vast Highveld Steel complex, in Mpumalanga, where all production at was halted in 2015 after the country’s second-largest steelmaker was placed into business rescue.

After an unsuccessful attempt to sell the company, all employees were retrenched in 2016, and the prospect dismantling the plant and selling it for scrap loomed large.

In an attempt to preserve the asset, a decision was made to repurpose the facility as a business park and rent out some of its buildings, workshops and rail sidings. The proceeds have been used to refurbish the Highveld’s heavy structural mill, which has now been reopened to process material brought in from ArcelorMittal South Africa’s Newcastle plant under a contract manufacturing agreement.

Highveld Steel Structural Mill CEO Johan Burger:
IN: As this business park concept developed and as we got more tenants in, we saw the opportunity to restart some of the key assets. And the jewel in the crown was obviously the structural mill.

Slowly, but surely, a team of dedicated, world-class engineers refurbish the plant  . . . bringing it as close as possible to new.

We eventually concluded this contract manufacturing agreement, whereby ArcelorMittal South Africa supplies bloom to Highveld, which converts it into value-added products before giving it back to Mittal, whose sales team sells it into the market.

By combining these two we have this fantastic synergy and we can now even roll mainline rail, which was previously imported. By cooperating we have created the synergy whereby we can produce this.

In early April, the refurbishment was complete and we started rolling on the 13th of April. We are happy with the performance, which has proved good from a quality and throughput perspective.

AMSA CEO Wim De Klerk:
We have received the first 4 000 t. The Quality was perfect and it was on spec. About 100-odd customers have absorbed the product in the first month. There is still a lot of work ahead and the aim it to raise output to 18 000 t per month. The steel compliments ArcelorMittal’s product range and it had to be imported for the last two years

So we have a two-year period in which to make this work. Thereafter, we have the option to extend this arrangement by another year and then hopefully somewhere we will be able to see the long term.