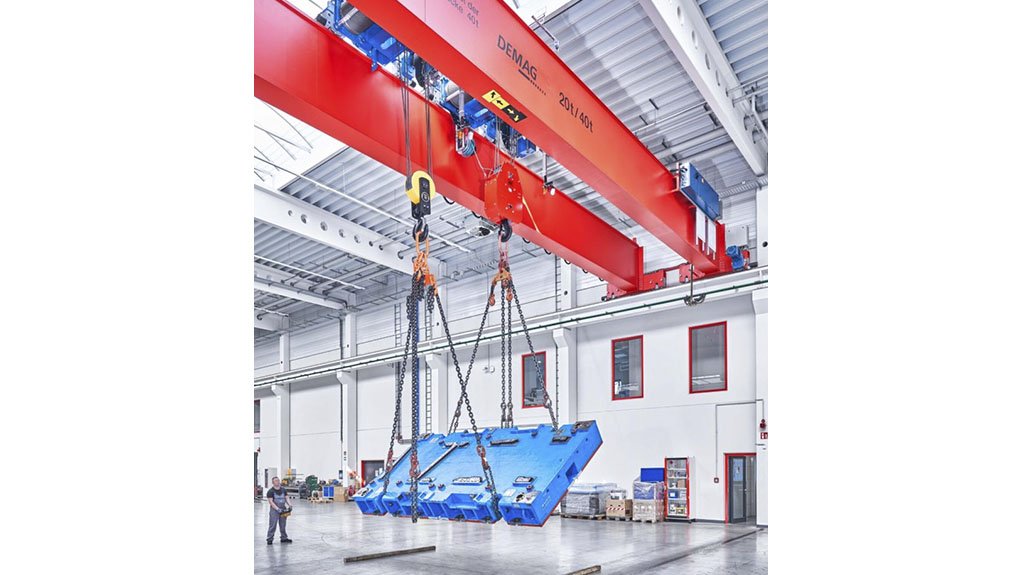 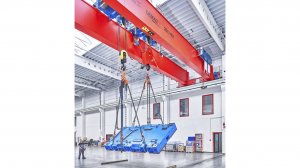 CAN YOU HANDLE THE LOAD Load-turning function achieves maximum safety as an optional feature, which eliminates the need for any additional engineering

In order to enhance safety during complex task such as horizontally moving heavy components for indoor cranes, industrial equipment supplier Demag has introduced a new standard function for its Universal Crane product range.

Crane installations can now be equipped with a load-turning function that achieves maximum safety as an optional feature, which eliminates the need for any additional engineering, says Demag MD Emil Berning.

“The additional costs are modest, but the benefits are high. This is made possible, in part, by monitoring the entire load turning process by using the Demag SafeControl safety control unit.”

Demag has standardised the ‘load turning’ option to such an extent that it requires significantly less individual engineering work for universal cranes with two hoists, without impairing the acknowledged high level of safety.

The customer will benefit from operating at the highest level of safety and functionality – two critical components in crane operations, he adds.

The package of features enabling the ‘turning of loads’ function includes a more generous specification of the steel structure and additional sensors.

Additionally, the Demag SafeControl system, which provides safety-orientated control and monitoring of all crane motions and functions, has been modified for the load turning process.

Depending on the requirements for the size of the rope hoists, an inclined angle of pull of up to 20º can be achieved. With the universal cranes modified in this way, loads weighing up to 50 t can be turned.

Berning explains that the user can choose between two safe versions. Precise measurement of the rope angle is achieved by combining the Demag SafeControl system with a two-channel, non-contact sensor system. With the basic version, an acoustic and visual warning is given as soon as the maximum deflection angle is reached.

In the safest configuration, the Demag SafeControl system monitors all motion sequences in terms of safety and automatically stops lifting and travel motions if the maximum permissible rope angle is exceeded. A high safety category is achieved: Performance Level d (lifting) or c (travelling) to EN 13849-1, category 3.

He notes that on both variants, the load turning function is wirelessly operated by joystick transmitters as standard, allowing intuitive control while keeping an eye on the load to be turned. Alternatively, control is also possible through hand-held button transmitters or hand-held transmitters with mini-joystick operating concept.

“With this option, Demag offers tool and mould manufacturers, in addition to companies that produce and use special machines and installations, an interesting special function in crane operation that is both safe and easy to implement.”

Berning concludes that it is technological advancements such as SafeControl that “continue to cement Demag’s reputation as a global leader” in the manufacture of cranes that offer high safety credentials, as well as innovative functionality that delivers a best performance for its customers’ operations.