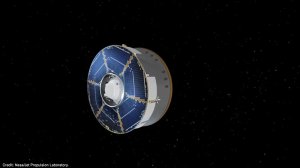 The Space Operations division of the South African National Space Agency (Sansa) has completed its involvement in the launch of the Mars 2020 spacecraft, which has now started its cruise through interplanetary space. It is the US National Aeronautics and Space Agency’s (Nasa’s) latest probe to the Red Planet and is carrying the Perseverance rover, which is the largest, heaviest and most sophisticated rover yet sent to Mars by Nasa.

Sansa Space Operations had an essential but unglamorous role regarding the mission. “We were contracted to support the mission in a backup capacity,” Sansa Space Operations business development manager Tiaan Strydom tells Engineering News. “We fulfilled this role up to and including what is called the ‘first visibility’ of the probe after launch, before it headed for Mars.”

“As backup, we still had to do full mission testing and a readiness review,” he highlights. “We were conducting technical qualifications and readiness tests for the past six months.”

“During the launch we were ready to support if anything went wrong,” he explains. “If anything had gone wrong, Sansa would have supported the non-nominal [emergency] operations. Since the mission was all nominal Sansa Space Operations did not actively participate in it.” (‘Nominal’ is Nasa jargon for ‘everything is going according to plan’.)

The Mars 2020 spacecraft is composed of the rover itself, plus the rocket-powered Mars descent stage, the aeroshell that will enclose and protect the rover and its descent stage (the aeroshell in turn is composed of the backshell and the heat shield, the latter protecting Perseverance when it enters the Martian atmosphere), and the solar-powered ring-shaped cruise stage.

The spacecraft is now on a 467-million kilometre voyage to Mars, that will take about seven months. Perseverance will land in Mars’ Jezero Crater on February 18 next year. The prime mission of the rover is to search for signs of ancient microbial life. It will also undertake climatological and geologic research and will be the first mission to collect and cache Martian surface material for subsequent return to Earth (by another spacecraft) for much more detailed analysis.

Perseverance is also carrying a small helicopter. Called Ingenuity, the 1.8 kg flying machine is a technology demonstrator to test if powered flight is practical in the very thin Martian atmosphere.

Meanwhile, Sansa is pursuing a related project with Nasa – the establishment of a new ground station for deep space probes at Matjiesfontein in the Western Cape province. Currently, Sansa Space Operations has only one complex, at Hartebeesthoek, in Gauteng province, west of Pretoria.

“The Matjiesfontein study agreement is in full swing,” reports Strydom. “We are meeting weekly to discuss operational and technical requirements and to understand if the Matjiesfontein site will be suitable. The next big step will be towards the end of this month when Nasa needs to make a decision on the way forward.”