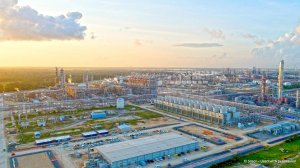 Debt-laden chemicals and energy group Sasol has announced a $2-billion joint venture (JV) agreement with LyondellBasell for its base chemicals business in Lake Charles, Louisiana, in the US.

Under the agreement, LyondellBasell will acquire 50% of Sasol’s 1.5-million-ton ethane cracker, as well as its 900 000-ton low and linear-low density polyethylene plants and associated infrastructure at Lake Charles.

LyondellBasell will operate the assets on behalf of the JV, which will operate under the name Louisiana Integrated PolyEthylene JV.

The deal, which still requires regulatory and shareholder approvals, is expected to close by the end of 2020. Once concluded, some of Sasol’s US employees will become employees of LyondellBasell.

Sasol will retain full ownership of the performance chemicals business in the US, which it has indicated to be core to its so-called ‘Future Sasol’ strategy.

Sasol said the transaction represented a “significant step” in achieving its financial and strategic objectives by reducing net debt and rapidly shifting the company’s portfolio towards specialty chemicals.

The JSE-listed group has been pursuing an accelerated asset-disposal programme as part of a broader effort to reduce its $10-billion debt burden by between $4-billion and $6-billion by the middle of 2021.

Sasol set a target of realising at least $2-billion from the sale of assets and has indicated that the success of its disposal programme, as well as its cost-reduction initiative, will determine the size of a possible rights issue, which had been capped at $2-billion.

Sasol president and CEO Fleetwood Grobler described LyondellBasell as an ideal partner, owing to its deep expertise in commodity chemicals.

“This milestone coincides with our 70-year anniversary and represents a significant step in creating Future Sasol, which will be a more sustainable and resilient business for the long-term,” Grobler said in a statement.

LyondellBasell CEO Bob Patel said the investment represented “a unique opportunity to bring together the best of both companies and create deep, long-term value while immediately realizing the many benefits of new, strategically-located, world-scale assets”.