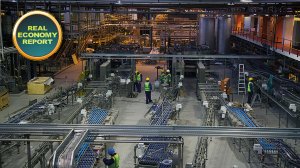 Anine Kilian:
The Johannesburg-based brewing and bottling major announced that its investment would be in addition to the public interest commitments made by AB-InBev during last year’s acquisition of SABMiller, whereby AB-InBev agreed to invest R1-billion in South Africa over five years.

The new packaging lines will have the capacity to bottle 45 000 bottles an hour and that SAB will purchase four-million crates and 48-million bottles to start production.

The expansions at both breweries will create additional part-time job opportunities and, once both packaging lines are running, they will create up to 70 new full-time jobs.

The cost of expansion at Alrode, including the packaging equipment and building works, will be more than R1.3-billion, while the Rosslyn expansion, which also includes a new brewhouse, will cost R1.5-billion.

The new imported brewhouse at Rosslyn is capable of 14 brews a day of 750 hectolitres, and is scheduled to be in operation by the first half of next year.

AB-InBev Africa president Ricardo Tadeu told Engineering News Online that the investment would help increase SAB’s capacity by between 7% and 8%.

“This investment will also have a positive impact on South Africa’s agriculture and agroprocessing sectors. We are investing in the local production of barley, which will [hopefully] assist South Africa to become exporters of barley as a raw material,” he said.

Tadeu added that, by creating jobs and driving economic growth and investment, SAB would contribute towards the company’s sustainable development goals, which are aligned with South Africa’s National Development Plan.

Nadine James:
Kwikspace CEO Shaun McCormack notes that the company has been active in Mozambique for several years, adding that its presence has ensured that it able to capitalize on the various opportunities presented by the Mozambique mining industry.

Nadine James:
Over the past year, Kwikspace has completed several mining projects, the most recent being a R20-million project completed in July for a Guinean gold miner.

McCormack notes that there has been a decline in large-scale projects, in line with weaker commodities prices, but adds that Kwikspace continues to track mining projects and developments throughout Africa, looking for growth opportunities.