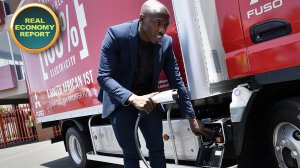 Beer maker South African Breweries and its parent company, AB InBev Africa, have announced that, in the lead up to being 100% renewable by 2025, all its breweries across South Africa will soon have solar facilities installed. Simone Liedtke tells us more.

AB InBev and SAB procurement and sustainability VP Taryn Rosekilly started off by giving Engineering News and Mining Weekly a bit of insight into the company’s plans for 2020 in the lead up to its renewable energy goal.

Rosekilly further gives us some indication as to whether or not the company is on track to meet the goals it has set out for itself.

Engineering News and Mining Weekly was invited to the showcasing of vehicle manufacturer Fuso’s electric truck, which is where the conversation with Rosekilly took place. She tells us a bit more about the truck, which is an example how companies and private users could support State-owned Eskom and the power grid.

According to Fuso South Africa head Ziyaad Gaba, the truck provides increasing insight into the transition to a low-carbon future. The truck, called the Fuso E-canter, is charged using renewable energy generated at SAB and has a carrying capacity of up to 3.5 t.

A single charge allows for an operating range of between 100 km and 120 km at optimal conditions.