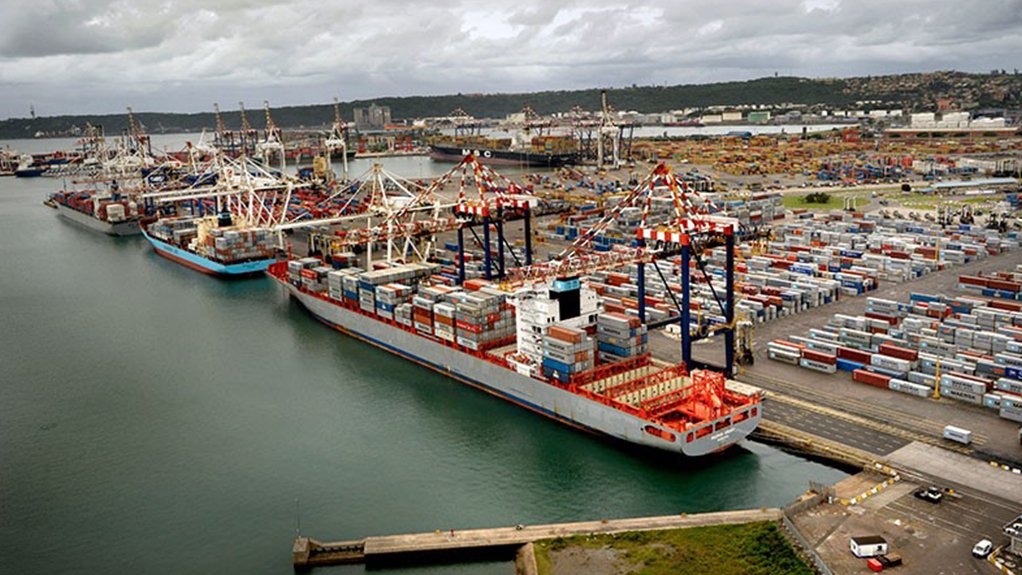 “Some businesses, especially small businesses working from load to load, might have already closed their doors.”

“To put that perspective, this correlates to approximately R1-billion per day which the logistics sector contributes to South Africa's GDP.

“So, even if a mere 10% of operations are affected per day, South Africa is losing roughly R100-million a day. And currently, certainly, more than 10% of logistics are affected by the impact of current events.”

The Durban Container Terminal (DCT) was, for example, expected to handle around 18 000 containers this week Monday and Tuesday, across Pier 1 and 2.

“However, due to the unrest [in KwaZulu-Natal], almost all port terminals and other operations are at a standstill,” says Maree.

“Furthermore, there are staff shortages across the board as employees either cannot get to work or are fearful of leaving home.

Some good news in the face of widespread looting in Gauteng and KwaZulu-Natal this week, is that all the country’s other commercial ports seem to be continuing their operations.

Air cargo operations also continued in the rest of the country this week, except in KwaZulu-Natal, says Maree.

“The unrest and criminality have affected all airfreight and flights out of the KwaZulu-Natal area, with the Dube Tradeport facility at King Shaka closing to ensure staff safety.

“As a result, aviation staff have not been able to get to the airport since Monday, and most express cargo to and from the KwaZulu-Natal area has been stopped, inclusive of most road transporters of express goods.”

“TFR has suspended operation in the Durban area and on the NATCOR [Natal corridor] Line.”

The N3 highway between Gauteng and Durban also remained closed until Friday morning.

More than 40-million tons of freight a year are carried on the N3 corridor around Pietermaritzburg, with approximately 9 000 heavy vehicles using the national road a day.

“As the N3 is also the main artery of the North-South corridor, cross-border truck traffic has been severely affected,” notes Maree.

For airfreight, the national impact is less pronounced, as Durban typically only moves around 5% of domestic air freight, she adds.

The Covid-19 pandemic has already had a massive impact on freight movements in South Africa, notes Maree.

“The current situation will only compound the problems we have experienced in the last 18 months,” says Maree.

“Ceasing port operations will have a knock-on effect on road cargo to the Gauteng epicentre.

“Already, for air cargo, airlines' cancellation of domestic flights until the end of July [owing to the third wave of Covid-19] has also impacted the daytime volumes moved domestically.

“Therefore, we desperately need to restore South Africa's crucial trade lanes along the main transport corridors of the N3 and N4,” emphasises Maree.

All sectors are set to be affected by expected shortages, she adds.

“However, food and other perishables will be hit first.

“Time-sensitive agricultural goods will be affected in about three days.

“The matter will become more severe in about a week or two. And, in terms of medicines, and especially Covid-19 vaccines, maintaining the cold chain at all times is critical.”

The Perishable Produce Export Control Board and Port Health and Immigration at the Durban Port are both closed.

“The closure of Port Health and Immigration effectively means that vessels cannot berth and will have to wait at anchorage as Covid testing cannot be completed, whilst immigration must authorise the arrival of vessels and crew,” explains Maree.

“This situation is exacerbated by launch crews also not being available.

“Lastly, export containers were already piling up at Durban port before the looting, due to vessels needing to undergo Covid-19 testing before cargo operations could commence.”

A blank sailing is a scheduled sailing that has been cancelled by a carrier or shipping line, which means that a vessel skips certain ports or even the entire route.

“This situation will pertain both to imports, as well as our exports,” says Maree.

“Shipping companies will not allow their vessels to sail to South Africa if they cannot quickly turn them around.”

Maree says it is also highly likely that truck operators will start rerouting away from KwaZulu-Natal, and that exporters will try to move vessel bookings through to Cape Town or Port Elizabeth, if possible.

“As has been the case throughout lockdown due to stringent regulations, South Africa has also already lost some market share to Mozambique.”

The timing of the unrest is also unfortunate, as the Durban Car Terminal has just broken a volume handling record in June, notes Maree.

“A total of 51 407 fully built units [vehicles] were shipped through the terminal, with exports and transhipments playing a vital role in the latest run.

“As a significant form of employment and foreign investment in South Africa, the [auto] sector will also be severely impacted by the current situation.”

Supply Chains Must Be Restored
South Africa needs all key stakeholders to come together to alleviate the current dire situation, says Maree.

“The supply chain is a living organism, which cannot handle any stoppages.

“Therefore, the supply chain, and the country, relies on all inter-linked parts' constant functioning.

“These include the smooth functioning of all trade going through our ports, roads, rails, air, and last-mile delivery.

“Supply chains do not function on an on/off switch.”

Maree says the seamless movement of goods between provinces, especially to ports, is critical to stabilising South Africa’s economy and to counter the effects that strict Covid-19 lockdown levels have had on international trade.

“We have had this struggle for a while now, and we have primarily succeeded in re-establishing the seamless flow of goods, albeit at lesser levels than seen pre-pandemic.

“Again, however, we are once again tested by the evil at hand.

“Unlike any individual industry, the supply chain acts like the glue holding the many different parts of our economy together.

“We indeed need to safeguard the citizens of South Africa as best as we can, but we will not achieve this goal if we do not get our supply chains back to a safe, functional level. Business continuity is crucial in these desperate times.”