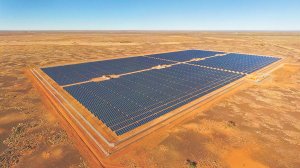 Konkoonsies and Aries solar facilities are constructed in the Northern Cape.

The Konkoonsies and Aries solar facilities, which reached commercial operation in March last year, were identified as two of the 28 preferred bidders under the REIPPPP in November 2011.

“More importantly, these projects were built on time and within budget, which is testament to the capabilities of the South African industry to add megawatt hours of power to the national grid within a certain timeframe,” BioTherm Energy CEO Jasandra Nyker says.

On a combined basis, the solar PV facilities, with a module surface area of about 133 000 m2, comprise more than 80 000 solar modules. The engineering, procurement and construction (EPC) contractor for these projects was Juwi Holding, a leading German EPC contractor that set up local offices to complete construction of solar projects in South Africa.

The modules will supply power to the national grid for the next 20 years through a power purchase agreement (PPA), secured with State-owned power utility Eskom’s single buyer office.

The facilities started to deliver a combined 20 MW of electricity to the national grid in early December 2013.

Nyker adds that, since the projects have been operational, they have produced revenue streams which not only benefit their shareholders, which include the local communities, but are also paired with BioTherm Energy’s ongoing enterprise development and socioeconomic development initiatives.

Tapping into Local Solar Capability While the company believes there has been a strong focus in the past on a foreign skills pool to build these solar PV projects, the company highlights that, from project experience, there is now a fair amount of local capability that can be used during the construction phases.

“It is time to nurture home-grown talent,” Nyker stresses, adding that the key is ensuring effective project management.

Effective management will lead to successful projects, she says, emphasising that industry needs to be proactive to ensure that deadlines are met. It must also ensure that budgets are maintained and adhered to, and that there is limited project scope creep.

Continuous Programme Participation Having participated in the various rounds of the REIPPPP and being awarded preferred bidder status for three renewable-energy projects in the first round, BioTherm Energy is participating in the fourth bid window and will continue to participate in future rounds of the programme.

“BioTherm is testament to the development of a home-grown independent power producer and proves that there is a strong local skills set that can be leveraged through the development, construction and operations of solar assets,” she says.

“Some of the key challenges include the timing and future certainty of the REIPPPP. While industry understands that delays are not unusual, there is concern regarding the communication of such delays, as they create uncertainty and pressure in terms of the pricing and estimates used to bid, including the prices and tariffs awarded. They also create sponsor risk to a certain extent,” she explains.

Nyker adds that the industry has become significantly competitive, which is exacerbated by an “unlevel playing field in terms of weighted average cost of capital, with ‘balance sheet players’ competing directly with players who use project finance”.

However, she acknowledges the programme as one of the most successfully managed and implemented renewable-energy programmes in the world. “It will continue to be the ‘best-in-class’ case study,” she believes.

A company is able to identify a site and, within three to four years, complete construction and reach the commercial operation stage, Nyker says, adding that these renewable projects are sustainable and should definitely be part of the energy mix in South Africa.

African Footprint BioTherm Energy has built a multiple-stage wind and solar project pipeline of about 2 GW across favourable resource and grid areas of South Africa to date.

BioTherm Energy was also awarded four solar PPAs in 2013 under the Zambia solar programme, expanding its portfolio in Africa and seeing it actively developing existing projects and greenfield development opportunities.

In addition to being shortlisted for Uganda’s Get Fit solar facility last year, the company was awarded 32 MW of renewable-energy projects in Burkina Faso, in West Africa, in October last year.

“While BioTherm Energy currently has a strong presence in seven African countries, focusing on wind and solar activities, the company will continue to explore opportunities throughout the African continent,” Nyker says, concluding that, owing to the strong interest and resounding success of the South African programme, the rest of Africa is now beginning to focus on renewables as part of their energy mix.