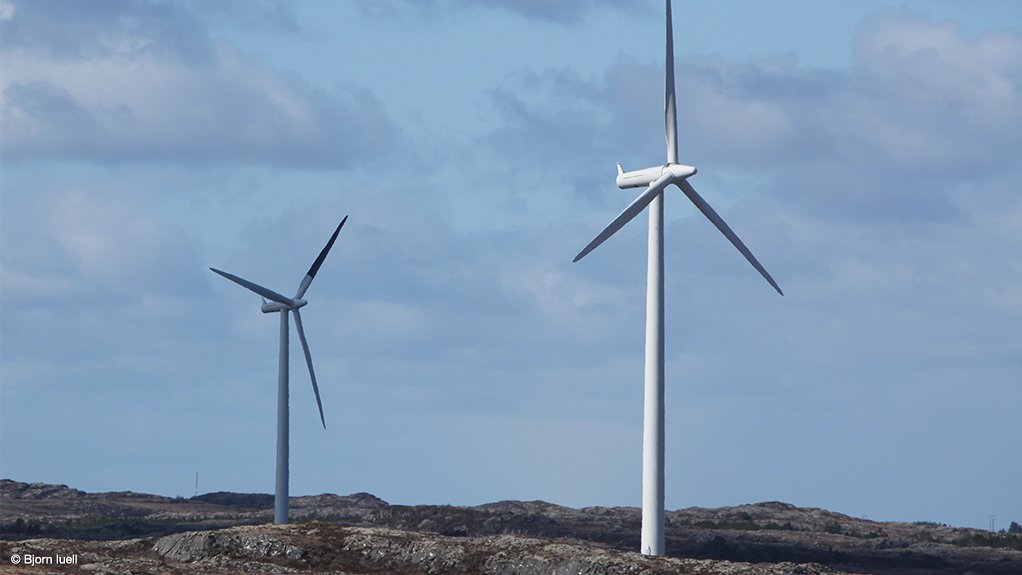 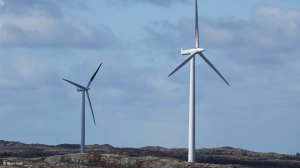 Photo by Bjorn Iuell
The black-blade set up on a cloudy day in Norway. The black-blade (far turbine) is little different to the shadow cast by the all-white blades in the foreground.

The renewable energy industry promises green energy that comes with numerous benefits to the planet. Given that South Africa is blessed with abundant resources in both solar and wind, there is little reason for us to be so dependent on fossil fuels that continue to warm the planet. Indeed, South Africa contributes about half of the Africa’s total greenhouse-gas emissions, through the burning of dirty coal and other fossil fuels. This has given us a bad reputation as a major polluter and we are the fourteenth worst emitter of greenhouse gases in the world.

The new government emphasis towards renewable energies, such as wind and solar, is the obvious route to reduce these costs, and with photovoltaic and trough technology, there are few environmental costs. Those tend to increase as one goes vertical, either with concentrated solar power (power towers) or wind turbines of ever-increasing heights and blade lengths. Developers continue to increase dimensions with talk of towers 200 m high and blades 100 m long. This is not good news for birds because exponentially greater numbers are killed as towers and blades increase in size.

Both the power towers and  the wind turbines have had a bad press. In the western US, Altamont, a huge wind farm with thousands of turbines of all sizes, and power towers in the Mojave Desert, with their huge mirrors, kill thousands of birds every year. This arose partly because they were on avian migration routes and partly because they were among the first of their type.

In South Africa, Birdlife South Africa, has produced guidelines to streamline the siting process and for highly sensitive species (Cape Vultures, Verreaux’s Eagles and Black Harriers) and specific recommendations are published to mitigate the risks. This arose because data on 20 operational wind farms found a wide variety of birds with raptors (e.g. eagles and  vultures) particularly sensitive, comprising 36% of the 840 bird fatalities recovered. These fatality rates (4.6 birds per turbines or 2 birds per megawatt) are similar to global averages and one can estimate that with 27 operational farms in 2020 producing about 2 294 MW, the cumulative impacts of South African wind farms alone are in excess of 4 500 birds annually. If about 36% are raptors (Ralston-Paton et al. 2017) and about 17% of those are red data species (Simmons and Martins 2018), then an estimated 280 red data raptors may be killed every year in South Africa.

To be fair to the renewable energy industry, anthropogenic impacts to wildlife from climate change, cats and high-rise buildings have a far greater impact than wind turbines. For example, it is estimated that, annually in the US, non-renewable fossil fuel energy sources kill about 14.5-million birds and cats kill one-billion to four-billion birds, whereas wind energy kills about 234 000 birds (Sovacool 2013, Loss et al. 2013a, Loss et al.  2013b).

That is a 62-fold difference for renewables and a powerful environmental argument in support of green energy.

Nevertheless, several innovative mitigation measures have been proposed for wind farms and, in a few cases, have reduced collisions. Developers are reticent to implement these as they are rarely field tested and, in the case of shutdown on demand, it may reduce profit margins. However, out of this has arisen black-blade mitigation – the painting of a single blade of the three white blades – to increase visibility.

The idea for black-blade mitigation arose from research that showed that, as a bird gets close to a fast-moving object, the retinal image is moving so fast that the bird's brain can no longer process it. This “motion smear” means that birds approaching a fast-moving object no longer see it, with disastrous consequences. This is so even for eagles with their legendary vision – because they see contrast no better than we do. The researcher suggested that a single black blade could break up the motion smear making the white blades more visible against a bright background.

Does this work? Black-blade mitigation was field-tested at the Smøla wind farm in Norway where five to six White-tailed Eagles are killed every year by the turbine blades. Four turbines were painted with a single black blade in summer 2013. The results were immediate and astonishing - the black-painted turbines killed both fewer total birds (71%) and 100% fewer eagles relative to unpainted blades. So successful was the experiment that to date (2020), no more eagles have been killed at the black-blade turbines in the 11-year experiment (May et al. 2020). This despite 45 to 50 territorial pairs present on the same island and the white-bladed turbines still killing birds an average of six eagles a year.

WHAT ARE THE VISUAL IMPACTS?
Discussions with wind farm managers in South Africa and Kenya suggest that visual effects are among the possible negative perceptions. However, the black blade, is barely distinguishable from the shadows cast by the topography of the blades on a cloudy day in Norway.

Black-blade mitigation has yet to be rolled out in Africa – but it is urgently needed here, given that Africa boasts over 100 species of raptors – more than any other continent (Clark and Davies 2018). We expect high numbers of raptor fatalities at African wind farms, because of the high diversity, and black-blade mitigation, pioneered by the Norwegians, could save many avian lives as  the race for renewables accelerates across the continent.

*Dr Rob Simmons is an ecologist, environmental consultant and conservation biologist with 36 years’ research experience in North America, Europe, Asia and Africa. He specialises on raptors, and with his students at the FitzPatrick Institute, University of Cape Town (UCT), he studies Black Harrier ecology, wind farm monitoring and impacts, the impact of domestic cats on biodiversity and the ecology and evolution of giraffe. He has published two books and over 110 papers as a research associate of the UCT. He runs his own Environmental Consultancy Birds & Bats Unlimited with Marlei Martins and is based in Cape Town.