New rooftop solar system to save Woolworths R215 000 a year 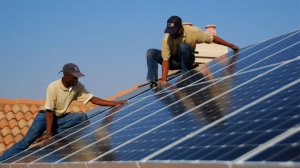 Through the installation of a 108 kilowatt-peak solar photovoltaic (PV) system on the roof of retailer Woolworths’ Cape Town head office, the company has over the past three months saved 30 828 kWh worth of electricity, which translated into an energy bill reduction of about R38 534, Woolworths said on Wednesday.

The rooftop solar system, that was designed and installed by South African company SOLA Future Energy, consisted of 432 panels, 250 W each, which had been mounted with roof clamps so no penetration of roof sheeting was required, eliminating waterproofing concerns.

The system took up about 800 m2 of roof space and was expected to generate nearly 164 000 kWh/y, which was equivalent to a total yearly saving of R215 000, SOLA FD Dom Chennells noted.

"This is not just a win for Woolworths or for the environment. We are showcasing world-leading technology, produced right here on our doorstep. SOLA’s work is considered to be among the best in the world and the solar modules are manufactured very close to our offices by SolaireDirect at their Bellville facility, in the Western Cape," Woolworths sustainability manager Justin Smith commented.