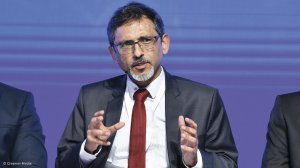 Within the next 100 days, the Department of Trade, Industry and Competition intends launching a support programme for new plant and equipment in metal fabrication.

“We’ll meet investors and stakeholders on the long-term development of foundries and steel mini-mills, including measures to enable the local beneficiation of scrap metal,” Trade and Industry Minister Ebrahim Patel told Parliament during this week’s debate on President Cyril Ramaphosa’s State of the Nation Address.

South Africa exports significant quantities of scrap metal, a major feedstock for foundries, steel mini-mills and even some large steel mills, with some scrap dealers appealing the department’s directive that it be offered to local producers in the first instance, but the Constitutional Court rejecting an application for leave to appeal.

Steps taken to improve domestic scrap availability have, over the years, been broadly supported by scrap consuming industries, but resisted by scrap metal recyclers.

The tribunal said in the release that the Competition Commission had accused the companies of having operated as a buyers’ cartel and of having fixed the purchase price of scrap metal from about 1998 to 2008.

In November 2016, the Competition Tribunal approved a settlement between AMSA and the commission after the steel manufacturer admitted to involvement in long steel and scrap metal cartels and agreed to pay a penalty of R1.5-billion for price fixing, the largest penalty imposed on a single firm in the history of competition law enforcement in South Africa.

Columbus Stainless also agreed to settle and paid a penalty of R32 576 835. Scaw South Africa, which is controlled by the State-owned Industrial Development Corporation, was a leniency applicant, against which the Competition Commission was not seeking any relief.

The media release stated that Cape Gate was the only remaining respondent in this matter and that closing arguments would continue on Friday.