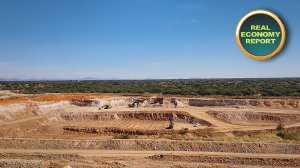 Mining investment firm Menar has officially launched its first-to-portfolio manganese mine, called East Manganese, based in Hotazel in the Northern Cape, which is expected to produce its first ore in July. Marleny Arnoldi visited the mine.

While the first ore from East Manganese will be produced in July, the company will ramp up to nameplate capacity of 30 000 t run-of-mine in August.

The mine’s 900 000 t reserve will be mined over a two-year mine life, from a 14 ha openput operation. The mine will produce mostly lumpy manganese and some fine material for export.

Menar decided to diversify the group’s commodity portfolio, in keeping with aspirations to become a leading South African diversified mining company, as well as to take advantage of the high green mineral and metal demand, as the world moves to decarbonise its economies.

The company remains nonetheless confident about its interests in thermal coal and anthracite.

The company is looking to invest in more manganese assets and discussions are underway in this regard, while it continues to develop more collieries.

East Manganese is serving as a stepping stone for the company to get acquainted with the commodity and build expertise in the manganese mining space.