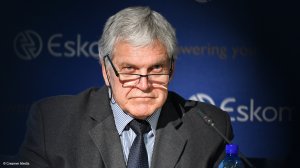 Eskom COO Jan Oberholzer has once again highlighted the utility’s liquidity crunch as a key constraint to the execution of its much-vaunted reliability maintenance programme, which is seen as key to reversing the poor operational performance of its aged coal fleet.

The fleet’s energy availability factor (EAF) has fallen to 64% year-to-date, resulting in 2021 becoming South Africa’s worst year yet for load-shedding.

The fleet comprises 15 stations, including the new Medupi and Kusile plants, with the average age of the remaining 13 stations standing at over 40 years.

Speaking during a webinar hosted by EE Business Intelligence, Oberholzer confirmed that only 18 outages had been implemented since the launch of the programme in early 2020, with a further nine currently in execution and 25 more in planning.

However, the utility had initially intended to implement 84 outages under the scheme and Oberholzer confirmed that 32 outages had been deferred, owing to a lack of finance and insufficient time and capacity to fully prepare for these.

Eskom has an internal outage-readiness target of 80%, but Oberholzer reported that most of the initial outages were conducted at readiness levels of about 60%.

The utility also required R11-billion yearly to maintain its generation assets, but only about R6-billion had been made available for the current financial year. In addition, the money had been released in stages, which had undermined planning and implementation.

Oberholzer insisted that the utility would still meet its internal target of having 10% of its fleet out for planned maintenance during the 2021/22 financial year, but he confirmed that it had failed to rein in unplanned outages.

Unplanned outages have surged to 24% year-to-date, well above Eskom’s 14% internal target, and the fleet has not become more reliable within the 18-month period set at the start of 2020 for its stabilisation.

Particular attention was being given to the three “headaches” of Kendal, Duvha and Tutuka, as raising the EAF across those stations to 70% would lift the overall EAF of the coal fleet to 69% – not far off Eskom’s internal target of 70%, but below the 75% level sought by the shareholder.

However, Oberholzer said the liquidity problem required a holistic approach, which included cost savings, the recovery of municipal arrears debt, a cost-reflective tariff and a solution to Eskom’s unsustainable debt position.

Development Bank of Southern Africa energy specialist Lungile Mashele warned that lenders were equally concerned about the maintenance backlog and the slippage in plant performance, which “directly impacts the ability to raise funding”.

Mashele warned that, while lenders assessed Eskom holistically, its technical performance was falling below the threshold required for lenders to advance loans to the utility.

Oberholzer reiterated that maintenance progress was also being hampered by the procurement framework under which Eskom operated as a Public Finance Management Act (PFMA) entity.

He said people with “no idea” of Eskom’s operations were making key decisions, some of which were taking up to 90 days to be confirmed.

Eskom has previously indicated that it is waiting on average 77 days for the National Treasury to make decisions on its PFMA-related requests.

However, the National Treasury has indicated that requests for departures or deviations from the PFMA follow a specific process that require it to obtain a factual motivation, and other information, prior to an approval being granted.

“It is on this premise that we consider the 77 days to be inaccurate due to steps that are conducted in this regard,” the National Treasury told Engineering News in response to questions on the matter.

“I'm not saying we are blameless,” Oberholzer said.

“I believe sometimes the submissions that we make to the National Treasury are not of the quality and standard that they are supposed to be.”