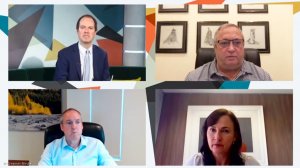 JOHANNESBURG (miningweekly.com) – The fast-tracking of the hydrogen economy will be much quicker than most people have imagined, Sibanye-Stillwater CEO Neal Froneman said at the Financial Times (FT) Commodities Mining Summit, where he was part of a panel that included Anglo American Platinum CEO Natasha Viljoen and South32 CEO Graham Kerr.

FT commodities correspondent Henry Sanderson, the moderator of the virtual event, asked Froneman: "How big an opportunity is the hydrogen economy for platinum group metals (PGMs) mining companies, to which Froneman replied: “It’s absolutely real. It’s already included in our forecasts and I notice many of the analysts and commentators are now starting to include separate line for fuel cells.” (Also watch attached Creamer Media video.)

Froneman was speaking after others had outlined that the amazingly broad potential applications of PGM-catalysed hydrogen fuel cells and electrolysers across not only transport, which gains most of the headlines, but also in hydrogen generation itself, energy storage, heating, cooling, clean steelmaking and a host of other industrial, mining, commercial and residential applications, at a time when cost-lowering within the hydrogen economy is gaining impressive momentum and plans are being devised to showcase hydrogen’s prowess at iconic global events, including next year’s Olympic Games in Japan.

“We intend to hold a conference in Tokyo at the Olympics next year to demonstrate that the hydrogen economy is happening. We actually see the future for platinum in a very robust light based on the transition to a hydrogen economy,” said Froneman.

“With the pressure on environmental clean-up and so on, there’s going to be a much quicker fast-tracking towards the hydrogen economy than most people imagined,” he added.

On that development, Sanderson asked Viljoen: “I know that South Africa has a history in the battery area, back in the 1980s with the Zebra battery." This was a reference to Anglo American successfully developing a Zebra battery that decades ago powered a Mercedes-Benz in which the late Anglo American chairperson Harry Oppenheimer was driven around Johannesburg to showcase its efficacy. "What kind of role is there now for PGMs in batteries, given that lithium-ion technology is so embedded in current forecasts?”

In her response, Viljoen said that at the moment, from a drive train point of view, the BEV is the only drive train that does not have any PGMs. But, as part of its marketing development effort, Anglo American Platinum had engaged with Lion Battery Technologies and a technology was being developed that would be using PGMs in that battery technology.

“It’s really enhancing the life and size of the battery and that ultimately is required,” said Viljoen, who added that PGMs would be playing a big role in improving the range of distance that BEVs could travel as well as the time it takes to recharge BEV batteries.

“With that market development that we’re doing through our AP Ventures, it creates an opportunity for PGMs to play a role independent of what the drive train preference will be going forward," said Viljoen. AP Ventures LLP is an independent venture capital firm incorporated in the UK and supported by Anglo American Platinum, the South African Public Investment Corporation, Mitsubishi Corporation, the Toyota-linked Mirai Creation Fund and Plastic Omnium. AP Ventures’ global mandate is to invest in pioneering new technologies across the areas of sustainable energy and resource scarcity, that use or unable the use of PGMs.

North American-listed PGMs company Platinum Group Metals (PTM), headed by CEO Michael Jones, believes PGMs will start to play a greater role in the development of more efficient lithium-ion batteries on the basis of lithium oxygen and lithium sulphur batteries performing better with the addition of PGMs to increase the energy density of batteries.

As Mining Weekly reported recently, the first batteries of this kind are likely to go to China, which has already made significant advances in the deployment of platinum-catalysed FCEV trucks.

PTM is currently developing its Waterberg PGMs project, in South Africa, which is predominantly palladium based and has 19.5-million ounces of proven and probable reserves. Its South African investor is Hosken Consolidated Investments, a black empowerment investment holding company, listed in the financial sector on the Johannesburg Stock Exchange. Hosken's major shareholder is the South African Clothing and Textile Workers Union. The group is involved in a diverse group of investments including hotel and leisure; interactive gaming; media and broadcasting; transport; mining and properties.

On whether FCEV-linked platinum demand would be a meaningful contributor to the growth of Anglo American Platinum going forward, Viljoen said:  “Absolutely”, and pointed to PGMs not only playing a key catalytic role in fuel cell stacks, but also catalysing electrolysers that generate hydrogen.

“The platinum loading at the moment in the fuel cell is still pretty high, and thrifting of platinum will be important for the long-term sustainability," Viljoen said.

She then went on to project potential quantities of platinum that would be in demand: "If you targeted about 1.25 g/kW, it gives about a third of an ounce for a light vehicle. If we take up in the order of ten million cars – and that is a prediction in 2050 being hydrogen vehicles – it will without thrifted values be about 13-million ounces. Thrifted values will be in the order of four-million ounces, which is a sustainable level. And that’s just for the hydrogen cells. That doesn’t include the electrolysis, where there is also an opportunity for PGMs. It doesn't consider heavy vehicles or the other applications like stationary electricity supply or smaller applications like forklifts, which are already being used with hydrogen supply.

“So, we believe there’s a real opportunity for hydrogen. I think it’s actually a very exciting opportunity and for that reason, we are playing a role in the development of the technology such as the hydrogen truck that’s under development. We will have that on the ground by quarter one next year, and not only will that play a role for us in our journey to carbon neutrality, but it will also support the development of the technology as such and it will be fairly easy to scale up. In Anglo American, there is quite a bit of application for that,” Viljoen told the virtual event.

While there is no doubt the environment, social and governance discussions are getting more intense, there is today not a substitution for metallurgical coal in the steelmaking process, and on the point that hydrogen will have a role in steelmaking, that is not the case currently.

Sanderson: What date would you put on hydrogen playing a role in steelmaking?

Kerr: The general consensus is somewhere between the 20- to 30-year mark but in saying that, technology can move pretty quickly. I think the one advantage we have coming out of coal is that we produce a very high quality coking coal, which results in less emissions compared with cheaper coal, and allows you to get more bang for your buck from energy-intensive usage.

Sanderson: When you say that discussion with investors is becoming more intense on metallurgical coal, has it become a limiting factor yet for business?

Kerr: The distinction between thermal coal and metallurgical coal, I think, is not as strong as what it was three or four years ago. I think three or four years ago people understood the difference. The focus was very much on energy coal. I think today there is a long discussion about coal being coal. So there is bit more pressure on people around that. But in saying that, we’re probably not attracting too much attention because we are not a huge part of that export market.

Sanderson: South32 has not released a Scope 3 emissions targets. If steel is so critical, why not work closer with your customers to reduce their emissions and set a target?

Kerr: We have very clear Scope 1 and Scope 2 targets. We initially set our first target for five years and now it is expiring at the end of this financial year, in terms of how long South32 has been demerged. As the next phase of thinking about our next carbon targets and climate change action planning, we will have a look at what the appropriate timing is around Scope 1, Scope 2 and Scope 3. But realistically, we’re 3% of the metallurgical coal market. Our ability to actually influence steelmaking is probably not as large as some of our competitors in that space but in saying that, I think we can continue to work in different associations and with some of the customer groups about investing in technology which we think will help Scope 3 emissions as well. We are looking to bring our business more to a bias of base metals and in particular, we are looking for more zinc and we are looking at nickel, cobalt and copper.

Sanderson pointed out that the World Bank has stated that aluminium would be a metal that has the most demand as the world seeks to protect the environment and asked Kerr about opportunities for the metal, which South32 produces at Hillside Aluminium in KwaZulu-Natal and at Mozal in Mozambique.

In response, Kerr said that there was no doubt that aluminium, if produced by the right source to make lighter vehicles and equipment, would help with the energy transition. Some of the other commodities such as zinc and silver were also part of the transition, as well as manganese sulphate, used in batteries.

On South32 working on alumina studies and decarbonising its Scope 1 operations, Kerr said the majority of South32’s emissions were came out of Worsley, the alumina refinery, and gases at Illawarra Gas, both in Australia, and two decarbonisation reduction projects were under way at these operations. Only 7% of its Scope 2 emissions would arise from South Africa’s Hillside aluminium smelter, which depends on mainly coal-fired electricity from Eskom. “That is, I think, something in the long term that we need to continue to work on with South Africa to look at being transferred to a different power source . Our other aluminium smelter is Mozal, in Mozambique, and that’s predominantly powered from a hydro source, so that would be the preferred source,” Kerr said.