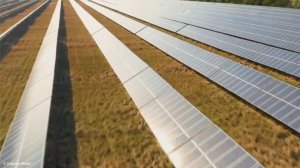 Creamer Media on January 28 hosted a webinar on decarbonisation and going green in the mining sector. Video and editing: Nicholas Boyd.

South Africa needs more power generation to overcome the supply gap and underpin economic growth, and investments by private companies, including mining houses, are essential to close that gap.

Renewable energy projects provide good economic prospects, help to decarbonise the mining sector and ensure its resilience and global competitiveness, while supporting the transformation of mining-dependent communities and supply chains.

Speaking during a 'Decarbonisation & Going Green in the Mining Sector' webinar hosted by Creamer Media on January 28, industry organisation Minerals Council South Africa environment, health and legacies senior executive Nikisi Lesufi said the council supports the decarbonisation of the mining industry and the South African economy, and recognises the need to move away from its reliance on coal-fired power generation.

He stressed, however, that a pragmatic approach was needed, with security of energy supply being maintained and with any reduction in coal-fired power generation being matched by a commensurate upswing in renewable energy generation.

"The private sector can step in to help close the gap, and this solves several problems. Individual companies can reduce their costs and decarbonise, and their projects are not necessarily displacing Eskom sales because there is a significant deficit and projects that add new capacity will help to reduce it.

"Private projects can also become an enabler by helping to attract international investment for energy projects . . .  and help to decarbonise the economy to ensure it remains globally competitive."

Further, private generation projects can also offset the need for Eskom to use expensive open-cycle gas turbines, which produce electricity at a higher cost than the set electricity tariffs, he added.

"Technologies that can be rapidly deployed to close this gap include wind and solar energy and energy storage. While South Africa needs a national-level plan around the appropriate mix of technologies to ensure grid stability, the current energy crisis means that more generation solves a number of problems, and is why [local] companies are [already] pursuing wind, solar and storage projects,” said Martin.

Coal and heavy minerals producer Exxaro Resources climate change and sustainability strategist Abel Sakhau pointed out that the company is not developing its own renewables projects to generate profits, but rather to help overcome the country’s energy deficit.

"We believe we can do solutions cheaper than government can, especially distributed generation solutions, and an important aspect is that, without decarbonisation of the South African grid, all industries will be negatively impacted.

"Therefore, it is important to create an enabling environment . . . by reducing red tape and regulations and drastically speeding up power generation licensing processes, to ensure we protect our products and our ability to compete in international markets," he said.

Exxaro's energy subsidiary Cennergi is one of the ways in which the company has diversified its portfolio and reduced the risks posed by a move away from coal globally, although the company aims to continue to support South Africa's energy supply security from its coal operations.

However, critical for the company is that it be allowed, from a regulatory perspective, to operate and move at speed to deliver energy solutions, said Sakhau.

Lesufi agreed, highlighting regulatory delays and the long time it takes for approval and licensing processes. Some approval processes can take up to 360 days, and there is no sense of urgency from the regulatory authorities and government departments, he said.

Further, regulators do not use risk-based processes, which means even low-risk projects take a long time to receive approval, he added.

"Without the ability of individual mining companies to fast-track projects, the industry will make slow progress," he stressed.

The Minerals Council is, therefore, calling for a differentiated risk-based approach to mineral exploration and energy projects regulations and approval processes.

The organisation reviewed its members’ energy projects, which are still awaiting approval and found that, for more than 40 projects, there were no flaws that could prevent them from proceeding. Many iterative approval processes could also be run in parallel, Lesufi pointed out.

"The Minerals Council believes licensing and approval processes should be managed according to a risk-based method, and this would be a good template for how the regulatory authorities' and government departments' normal business processes should function," he said.

"I am confident the industry will transition, but it is taking longer than we expected owing to the plethora of red tape. We aim to place pressure on all industry stakeholders to recognise that we are on a burning platform in terms of energy security and delays are not cost-effective for companies, the industry or the country," said Lesufi.

"The reason for this is that large single operations can cater for their own needs, which include the larger miners, but smaller operations cannot do so sustainably or at adequate economies of scale.

"Wheeling will unlock the potential for projects that can serve smaller operators and, while this will bring challenges for Eskom, it is probably the cheapest solution currently to overcome the energy deficit," he explained.

He added that further deregulation was also needed so that companies could go beyond the 100 MW licensing exemption cap.