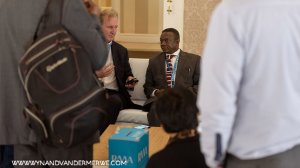 JOHANNESBURG (miningweekly.com) – The government is partnering the State-owed Industrial Development Corporation (IDC) to establish a junior miners’ fund that will provide exploration investment capital to black-owned emerging miners; it is also investing R20-billion in the Council for Geoscience to boost exploration as well as legitimising illegal diamond zama-zamas in Kimberley.

Revealing these initiatives at the Junior Indaba on Tuesday, Mineral Resources Deputy Minister Godfrey Oliphant told Mining Weekly Online that the junior mining fund was being established within the context of a departmental junior miners’ programme aimed at providing opportunities for new entrants identified throughout the mining value chain.

Moreover, he said that the investment in the State-owned Council for Geoscience was part of a ten-year programme to map the country’s mineral resources on a scale of 1 to 50 000.

In addition, former diamond zama-zamas would now be permitted to mine a diamond tailings dump and 500 ha of diamondiferous ‘floors’ following engagement with private sector company Ekapa Mining.

The Deputy Minister revealed further that the Department of Mineral Resources (DMR) was one consultation away from concluding the revised Mining Charter ahead of its gazetting.

This position had been reached after engagement with affected communities across the country owing to their inputs being crucial for the growth, development and sustainability of the mining industry.

He said that President Cyril Ramaphosa had tasked the Mineral Resources Ministry with ensuring that the mining sector was transformed to ensure that it developed sustainably and inclusively.

A summit would be convened this month to present the draft charter with provisions to ensure job creation, beneficiation, local procurement and employment equity, and to promote skills development, technological innovation and exploration.

South Africa’s potential to develop economically for the benefit of all was emphasised by the invitation received to attend the upcoming Group of Seven summit in Canada, after a seven-year absence.

The President had laid down that South Africa would use the opportunity to invite investors in the economic forum of some of the most powerful nations in the world to inject capital into the mining sector.

This investment was particularly crucial for junior miners as most struggled to grow in the face of challenges of limited funding and lack of mentorship.

To that end, a junior miners’ programme for new entrants across the mining value chain would assist with issues of access to funding, geological information, access to markets, with the aim of diversifying ownership, increasing investment and generating jobs.

Currently, most of the 90-plus companies on the department’s database required funding, which was the reason for the establishment of the junior miners’ fund.

Government had also started engaging the private sector to contribute a small portion of turnover to this fund to keep it sustainable.

The DMR in partnership with the Department of Trade and Industry had sponsored junior miners to travel abroad in pursuit of foreign direct investment into their projects.

The emergence of small and medium-scale enterprises was seen as being vital for the future of the mining industry, which had seen a decline in employment to 450 000 people.

“This can change if we support juniors. Junior miners are the principal drivers of exploration, resulting in them having the largest potential to create new employment opportunities in the sector,” the Deputy Minister said, adding that sustainable mining required extensive exploration.

On Thursday, former zama-zamas – now conferred the status of Kimberley Artisanal Miners  – would receive the formal handover of diamond-bearing assets. Some of them are already properly licensed to trade and deal in rough diamonds.