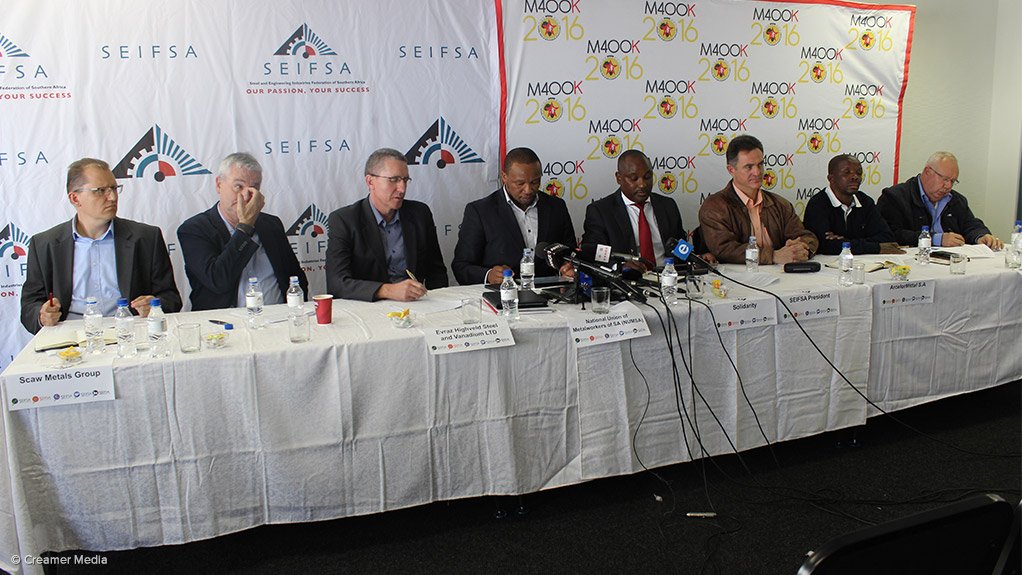 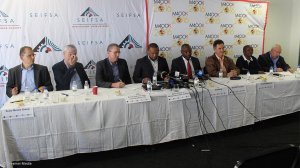 In a rare show of collective force, labour and business in the steel sector appear to have successfully lobbied government to back efforts to raise protection for the embattled sector by hiking import duties on steel imports to the 10% “bound rate” allowed for under South Africa’s World Trade Organisation commitments.

Several processes were currently under way, including several International Trade Administration Commission of South Africa (Itac) investigations that had been instituted following the submission of applications for protection on a range of steel products. It is understood that Itac deliberations on the first few applications are at an advanced stage and that a determination should be delivered soon to the relevant Ministers for final approval.

Demonstrating its support for a local steel sector hit by cheap imports, muted local demand and stalled large-scale infrastructure projects, government had agreed to expedite the process of tariff approval, but it reiterated that it would proceed with due regard to the country’s legal obligations.

Several major steel producers and labour unions revealed during a joint press briefing on Monday that the proposed tariff hike would, however, include a demand that the industry not raise the price of steel to “unaffordable” levels.

The resolution followed a watershed meeting between labour, business and government last Friday, during which stakeholders debated various trade remedies aimed at putting the brakes on a possible employment “bloodbath” of up to 40 000 lost jobs in the sector by the end of the year.

Further disclosed on Monday was steelmaker ArcelorMittal South Africa (AMSA’s) intention to submit the first of five antidumping applications by the end of the month, with the remainder following “as soon as possible”.

Major steel players hardest hit by the depressed industry were Evraz Highveld Steel & Vanadium, which earlier this year filed for business rescue and had since warned of impending job cuts, as well as AMSA and Scaw, both of which were considering restructuring options that could result in the loss of jobs.

Government also indicated its support for the designation of the local steel industry, agreeing to the establishment – through the Department of Public Enterprises – of a committee to investigate how State-owned companies could enhance their procurement support for the local sector.

Steel companies Cape Gate and Scaw further committed to providing the DED with evidence of what they argue is Itac’s noncompliance with an agreement relating to the ban on the export of scrap metal.

The DED, in a statement, committed that measures would be taken to address the surge in the export of scrap metal, which it claimed undermined the domestic industry and “compromised national goals”.

The parties would, meanwhile continue to work together towards solutions aimed at avoiding sweeping retrenchments, with government indicating that it would investigate how the DTI’s Training Lay-off Scheme could be used more effectively to avoid “imminent” retrenchments.

“These partial gains we have secured will be shared with our individual constituencies, as we continue to navigate solutions to avert the imminent job loss bloodbath,” read the joint statement, which was issued on behalf of trade unions Solidarity, the National Union of Metalworkers of South Africa (Numsa), Uasa, the Metal and Electrical Workers Union of South Africa, steelmakers AMSA, Evraz Highveld Steel & Vanadium, Cape Gate, Scaw, Macsteel Coil Processing and industry body the Steel and Engineering Industries Federation of Southern Africa (Seifsa)

NO SILVER BULLET
While welcoming the enhanced tripartite collaboration, representatives of business cautioned on Monday that the commitments could not be viewed as a “quick-fix” for an industry that had long battled depressive market externalities.

AMSA CEO Paul O'Flaherty said the South African steel industry was currently in a recession, with steel consumption currently at levels last seen during the economic crisis in 2009. Imports of the metal had swelled from 7% in 2009 to almost 30% in 2015, he added.

“This is not a lifeline . . . we must be clear about this . . . and labour will probably argue with us. [These interventions] will help us in the long-term, but, in the short-term, these issues are still critical.

“These agreements won’t happen today or tomorrow, [and so], at AMSA, we’ll [still] have to look internally at what our steps will be,” he told a media briefing, in Johannesburg.

Seifsa CEO Kaizer Nyatsumba added that, while it was too late to address the ailing sector’s short-term challenges, the recent agreements could serve to strengthen its longer-term fundamentals.

“[The] sector is currently in a crisis that’s the perfect storm. . . [it’s] unprecedented and all these things we haven’t addressed in the past are now being addressed. If we do nothing today, there is no industry tomorrow, [so] we have to be respond and be dynamic,” he held.

Numsa general secretary Irvin Jim added that the collaboration between labour and business was indicative of the urgency with which industry interventions were required.

“Approaching government is the first phase to indicate that something urgent needs to be done.

“I say it is the first phase, because we are clear that what we can’t win in the boardroom we can win in the streets. Workers will ensure that government and business move with speed,” he maintained.

Jim further called on government to accelerate the roll-out of its long-touted infrastructure programme.

“Everyone says that infrastructure spend is in the pipeline, but where is the pipe? Government must spend, that’s why we’ve called for the designation of the sector and [why we will] ensure that every piece of steel used in every project is bought locally,” he advanced.

The parties would again meet in a month’s time to assess the progress on the agreements that had thus far been reached and plan for future interventions.