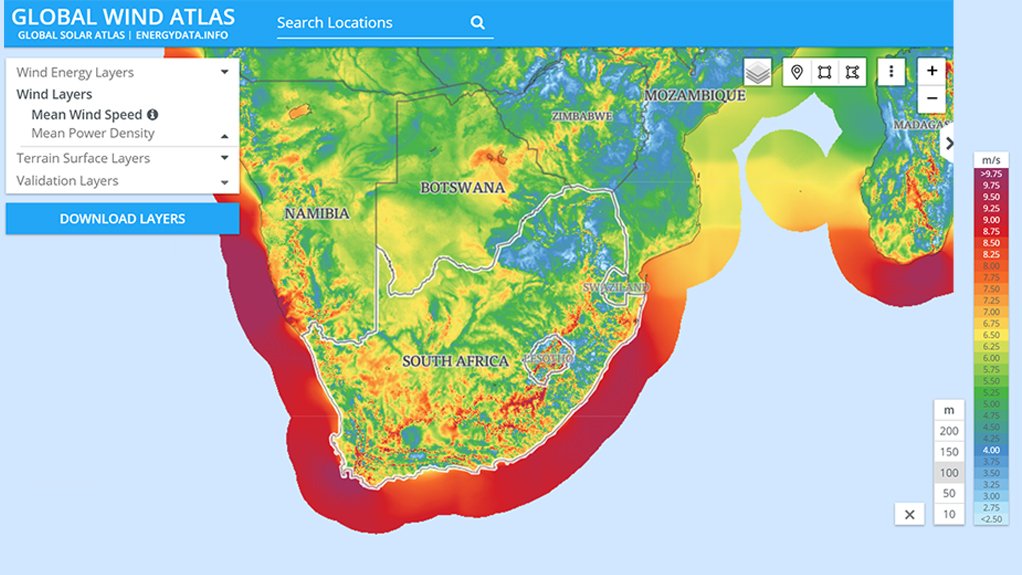 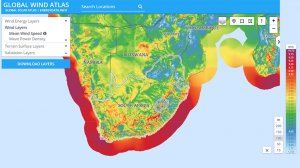 The Global Wind Energy Council (GWEC) says that, while South Africa has strong onshore wind potential, it would nevertheless encourage domestic policymakers to begin creating the framework for an offshore wind industry given the country’s “excellent” offshore wind-energy potential.

The World Bank Group's 2019 ‘Going Global Report’, which assessed the technical potential for offshore wind-energy within 200 km of the coasts of eight developing countries, estimated South Africa’s technical offshore potential to be 646 GW.

Only Brazil’s potential, at 1 228 GW, was higher in an assessment that also included India, Morocco, the Philippines, Sri Lanka, Turkey and Vietnam.

The regions with the highest potential, with average wind speeds of over 7 m/s, were identified as being off the eastern coast near Durban, as well as along the coast stretching west from Durban to the Namibian border.

Owing to South Africa’s rough seas, strong currents and waters that are typically deeper than 50 m only 57 GW of that potential was attributed to fixed-bottom offshore wind solutions, however.

Floating wind platforms could unlock up to ten times more energy capacity, with the potential estimated to be 589 GW.

“As the majority of the offshore wind resource for South Africa is located in waters too deep for fixed-bottom, floating offshore wind will be an important technology to unlock new clean energy opportunities for the country, and we are already seeing interest from the industry in establishing demonstration projects,” GWEC tells Engineering News in response to questions posed following the release of the organisation’s ‘Global Offshore Wind Report 2020’.

The GWEC report notes that 2019 was the best-ever year for offshore wind installations, with 6.1 GW of new capacity added, raising cumulative installations to 29.1 GW.

It also states that floating technology will come of age this decade, tripling the technical potential for offshore wind across the world.

“Once commercial-scale projects are established and costs come down many other locations will come into play, for example South Africa, Canada, Philippines and many island states,” the report’s authors assert.

Although floating offshore wind is currently more than double the cost of fixed-bottom turbines, GWEC expects that the solution will “reach full commercialisation by 2030”, making it a more viable solution for South Africa's energy mix.

“While South Africa has a strong onshore wind resource, the wind resource is generally stronger at sea, therefore there is simply more capacity available offshore than onshore. Thus, each turbine at sea can produce significantly more clean power than a turbine on land.”

“Currently there are no policies or roadmaps for offshore wind in South Africa, so it is too early to say when it could become commercially viable without these in place and more studies are needed on the topic.”

GWEC says the case for offshore wind is not only being strengthened by rapid cost declines, but by the significant economic benefits associated with its deployment.

“We have already seen how offshore wind has transformed coastal cities in Europe to becoming thriving industrial hubs.”

To extract these benefits, however, policymakers must establish a regulatory framework that is fit-for-purpose with a long-term horizon to spur industrial development and attract investors.

“There are plenty of lessons that can be learned from the development of offshore wind in Europe, and policymakers can use these lessons to reach cost-competitiveness for offshore wind at an even more rapid pace.”

Because offshore wind is integrated into the grid like any other energy source, investments in grid infrastructure will also be needed.

GWEC highlights, though, that the production profile of offshore wind turbines is generally less variable than those associated with onshore wind or solar photovoltaic farms.

“There is already a 765 kV grid connection in both Cape Town and Durban with plans for reinforcements which could transfer offshore wind power north where power demand is concentrated in the country.”