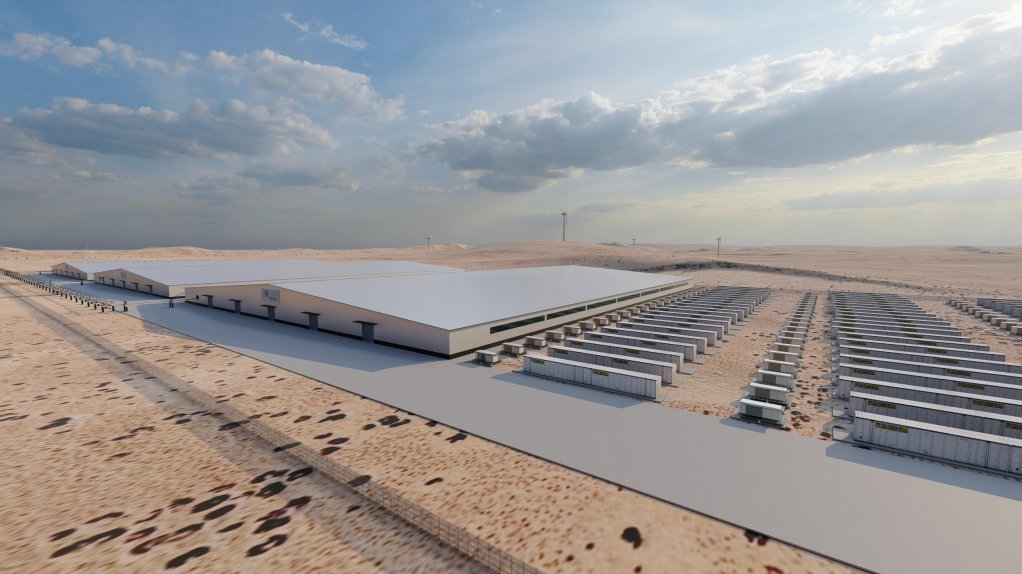 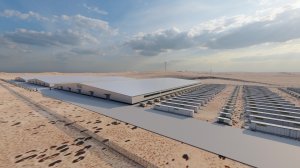 Photo by Supplied
Artist impression of the Hyphen electrolyser facilities proposed for development near Lüderitz, in Namibia

The preferred bidder for a gigawatt-scale green hydrogen-to-ammonia project near the coastal town of Lüderitz, in Namibia, is aiming to conclude an implementation agreement with government by August, opening the way for a full-scale feasibility study to enable the implementation of the $10-billion project.

Following a competitive bidding process, the Namibian government announced the selection of Hyphen Hydrogen Energy as the preferred bidder for the country’s first green hydrogen project in November 2021.

In an update provided at the recent World Economic Forum, in Davos, Switzerland, Hyphen’s Marco Raffinetti said the implementation agreement would signal the formal contract award and would trigger the feasibility-study phase.

A joint venture between Nicholas Holdings of the UK and ENERTRAG of Germany, Hyphen aims to develop the project in two seamless phases, beginning with the $4.4-billion first phase to produce 125 000 t/y of green hydrogen, to be further processed into 700 000 t/y of green ammonia for export to Europe.

Speaking at the Namibian pavilion, Raffinetti indicated that, following pre-environmental assessment phase studies and community engagements, Hyphen was gearing up for the feasibility study and was aiming to achieve financial close by the third quarter of 2024.

“That would then enable us to start mobilisation to commence construction in early 2025; targeting a two-year build and first gas at the end of 2026 and immediately rolling on to the second phase without demobilising the construction team.”

Raffinetti said rapid implementation was being supported by the greenfield approach that had been adopted by Namibia, which viewed the project as the start of a large-scale green hydrogen export industry.

The approach was premised on a common user infrastructure commercial and technical design to facilitate further green hydrogen projects in the earmarked zone, which is located in the Tsau//Khaeb National Park.

Tsau//Khaeb has a total area of 25 000 km2 and 4 000 km2 was awarded in the first auction. The area has solar resources of up to 2 800 full-load hours yearly and average wind speeds of 10 m/s, equivalent to offshore wind speeds in Europe.

ENERTRAG’s Dr Tobias Bischof-Niemz said the approach being adopted by government provided for “rapid scalability” beyond the Hyphen development and had the potential to lay the foundations for yearly production of three-million tons of hydrogen from Tsau//Khaeb.

The common infrastructure includes pipelines for desalinated water and return brine and for green hydrogen and ammonia, as well as port facilities and transmission lines to transport surplus renewable electricity into the Southern African Power Pool.

After Phase 2, the Hyphen project itself will have solar and wind electricity generation capacity of nearly 6 GW and 3 GW of electrolysis, which will yield 300 000 t/y of hydrogen, which translates into 1.7-million tons of green ammonia.

However, Bischof-Niemz said there was potential for Namibia – regarded as one of the leading global locations for the manufacture of green hydrogen (others being South Africa, Australia, Chile, Morocco and Saudi Arabia) – to produce 15-million tons of hydrogen yearly, or about 5% of global hydrogen demand for tradable hydrogen-based products by 2050.

At such a scale (150 GW of electrolysers and 250 GW of renewable electricity), Namibia’s entire energy sector would not only be fully decarbonised but could also support the efficient decarbonisation of hydrogen importers, as less wind, solar and electrolyser capacity would be required for the same level of output.

Seaborne exports would likely take the form of easily tradeable and transportable products such as ammonia and methanol, while direct hydrogen could be supplied by pipeline to South Africa to produce products such as green iron or steel on the West Coast and synthetic fuels and chemicals at Secunda, in Mpumalanga.

The surplus electricity produced could also support South Africa’s electricity sector decarbonisation and improve security of supply to the rest of the Southern African region.

Namibia also has its own plans to industrialise off the platform created by green hydrogen and is already assessing various downstream opportunities in the areas of steelmaking, ore reduction and synfuels production, as well as other electricity-intensive industries.

Upstream renewable and electrolyser component firms were also likely to be attracted given the scale of the investment anticipated and Bischof-Niemz calculated that about 200 000 permanent jobs could be created in the wind and solar sectors alone.