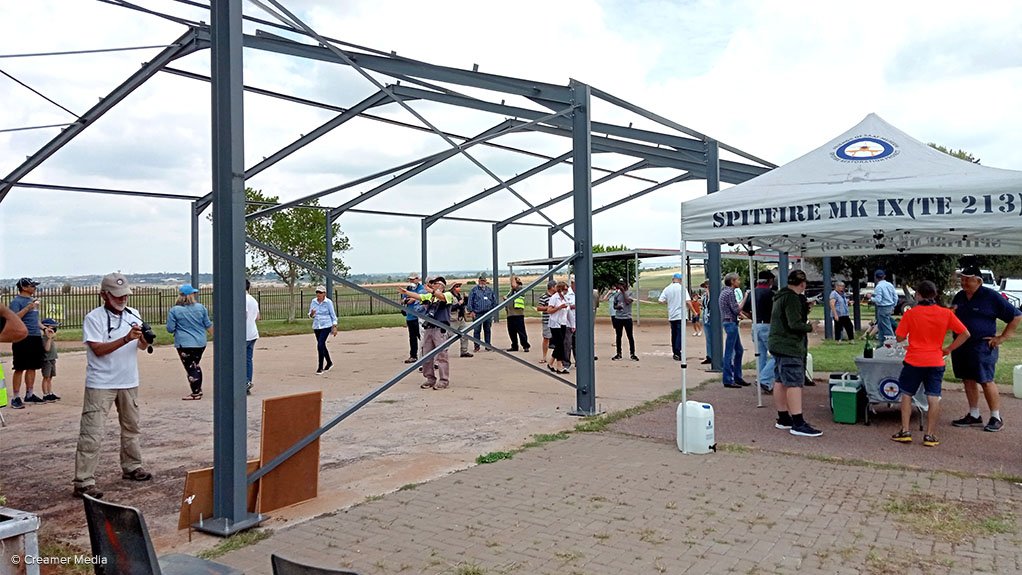 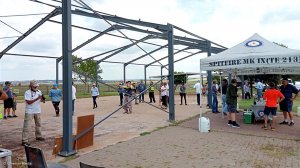 The project to rebuild South Africa’s only Supermarine Spitfire fighter aircraft has reached an important milestone, with the erection of the structure for the new workshop required to reconstruct the aircraft. This was marked with a small celebration held on Saturday, March 5, which was the eighty-sixth anniversary of the first flight by the original prototype Spitfire, in England.

During the Second World War the Spitfire (which was produced in 24 different versions, or marks, including a naval variant for use from aircraft carriers, called the Seafire) became a global symbol of freedom and resistance to tyranny, being operated by almost every single Allied air force. Across all categories, it is one of the most famous aircraft ever built.

The project is being implemented under the aegis of the South African Air Force (SAAF) Museum, which owns the aircraft concerned. The body actually responsible for rebuilding the Spitfire is the South African Aviation Foundation Museum, a not-for-profit public benefit organisation, which trades as the Spitfire Project. The workshop is being built at the SAAF Museum site at Air Force Base Zwartkop, southwest of Pretoria.

“This event marks the start of transforming this project from a dream to a reality,” Spitfire Project steering committee member Colonel Tony Smit SAAF (retired) told Engineering News Online. “We had gathered enough money to build the structure and half the roof and we decided to do so, to show our donors that we are making progress and that their money is being well used.”

To date, the project has raised about R300 000. To complete the roof will require another R75 000. After the roof is finished, the next step will be to construct the walls, with windows. That will be followed by the installation of the big sliding doors to provide easy access to the building. After that, the electrics will be installed. Because of a problem with dolomite at Zwartkop, the new building will not have a water supply.

Once the building was complete, the necessary tools, particularly the essential jigs, would be set up inside. As the jigs for a Spitfire can not be bought (they exist, but are unaffordable), the Spitfire Project planned to construct them in-house. “We should be able to get the plans,” he said.

The subject of the restoration project is a Spitfire Mark IXe, serial number 5518, built in May 1945 and delivered to the SAAF in 1947. It was retired from service in April 1954 and then preserved in a nonflying condition for some 35 years, mounted on a plinth at AFB Waterkloof. It was then lifted off its plinth, completely overhauled, its parts restored or replaced, and returned to flying condition. Sadly, the 5518 was wrecked in a nonfatal accident in 2000. The proposal to restore it again was authorised by the SAAF Museum Council in 2015. The project has suffered delays owing to the Covid-19 pandemic.

“We have cost estimates for all the work still to be done,” reported Smit. “We need any help that we can get, and any help will be greatly appreciated.”