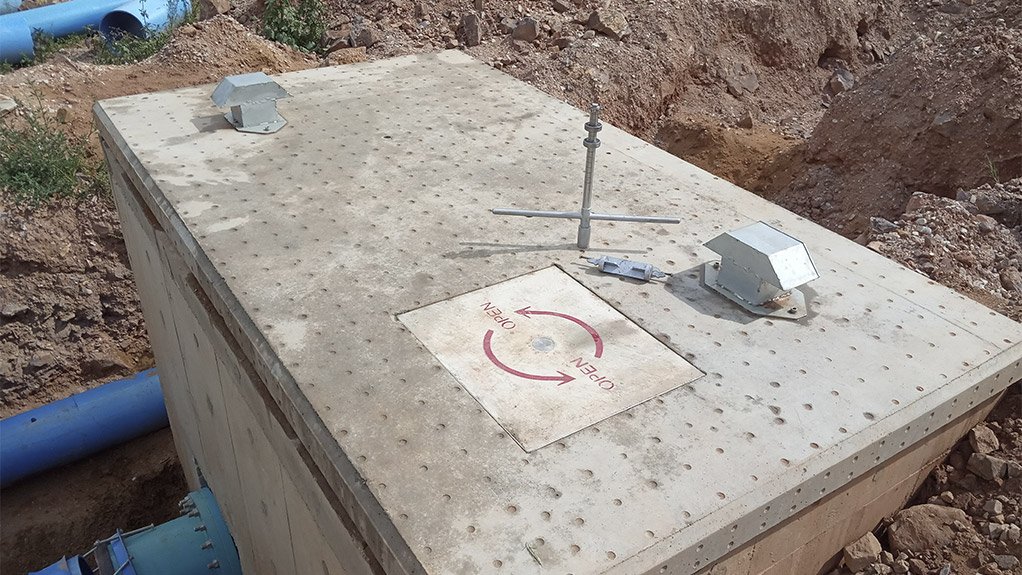 Steel lids are easily vandalised, as the locking bar positioned over the lid can be cut off, leaving a valve chamber vulnerable, he says.

Concrete Doors & Vaults was established in 2015 out of demand for anti-theft and/or vandal products.

The company offers several effective vandal-resistant solutions; among them a no-gap lid seated in a precast slab for new valves chambers and a no-gap lid in a cover slab for existing valves.

With the no-gap lid, vandals are unable to insert picks or levers, as the sides of the manhole opening and the lid are both inwardly sloped such that, when the lid is seated in the slab, there is no gap between them. The use of angle grinders on the locking mechanisms is also eliminated, as the robust locking mechanism is attached to the bottom of the lid.

The access tube is now open and the opening tool is inserted. Its pinion goes through a keyhole plate and engages the two locking levers. On rotation of the handle, the locking levers move inwards and exit the two sockets in the slab. Thereafter, the lid is lifted out of the slab.

When dealing with an existing valve chamber where the lid has been compromised, an effective solution is to remove the steel lid and install a cover-slab with a ‘no-gap lid’ over the manhole, says Papenfus.

A central stainless access tube is provided for the opening tool to engage the locking mechanism. The slabs and lids are manufactured from highly chisel-resistant 60 MPa concrete.

The lid has four layers of closely spaced rebar, such that the maximum passage between bars is 20 mm. “This prevents the use of chisels during vandalism attempts,” says Papenfus.

The lid also has an exoskeleton of 3Cr12 (12% chromium utility stainless steel) plates, which add further resistance to chisels.

The access tube is closed at the top by a stainless steel plug, and further down by a patented cylindrical lock.

All steel components are made from corrosion resistant stainless steel – SS304 or 3CR12.

Concrete Doors & Vaults offers a range of products that provide extreme protection against theft and vandalism of vulnerable infrastructure in the water, power and telecommunications sectors.

The products are mostly made from heavily reinforced high strength 50/60 MPa concrete, and include sliding doors for securing pumpstations and sub-stations, vaults for securing boreholes and control panels, and ventilation panels for generator rooms.