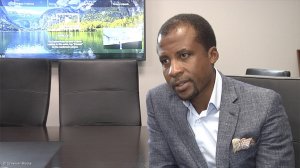 He tells Engineering News & Mining Weekly that there is still a lack of understanding surrounding the stationary energy opportunity, which he says “is going to be bigger” than the EV market opportunity.

Within this space, Bushveld Minerals believes there is “a unique and a very sizeable opportunity” for vanadium redox flow batteries (VRFBs), which Mojapelo says “speaks to the strength of the vanadium fundamentals outlook”, which is supported by the demand from the steel sector with the new standards being implemented in China, where a greater intensity of vanadium use is expected.

According to Mojapelo, stationary energy storage applications are expected to eclipse mobile applications for batteries within the next 20 years.

It is for this reason that Bushveld Minerals is a vertically integrated company, thereby becoming a critical enabler for unlocking the VRFB opportunity in the energy storage space, particularly as the supply and cost security of vanadium, which represents a significant chunk of the cost of a VRFB, are key challenges.

“We think you can best solve those two elements through a vertical integration strategy, which is why we went downstream. But we also think that the commercial opportunity of stationary energy storage is huge as well,” Mojapelo says, adding that the markets are fairly regulated and structured.

Combining Bushveld’s participation along with these benefits, he says the company’s shareholders “will benefit immensely” from participating in the value chain.

Mojapelo argues that South Africa “is in a unique position” – as it has, among others, the largest high-grade primary vanadium reserves in the world – to build a value-chain-intensive industry targeting the energy storage sector.

And it is not just for vanadium.

“We think that for South Africa’s battery metals as a whole – whether this is talking about vanadium, nickel, platinum-group metals (PGMs), manganese – we have the largest reserves in these commodities.

“We’ve got grade, we’ve got primary processing infrastructure and we’ve got the technical know-how from a metallurgical point of view, and we have actually got really deep metallurgical expertise in this country,” Mojapelo states, adding that, just as importantly, South Africa also has a market for these.

He refers to the Integrated Resource Plan 2019 (IRP 2019) and government’s intention to allow entities, such as the mines, to generate their own electricity, enthusing that “the South African market for stationary storage is huge”.

State-owned Eskom announced last year that it wanted to procure 1 400 MWh of battery energy storage, and the World Bank has committed $1-billion, with a view to leverage that up to $5-billion - part of the target to secure 17 500 MWh of battery storage for low to middle income countries.

The IRP 2019, meanwhile, has an allocation of 2 000 MW of energy storage, and has “bold commitments” to renewables, which will come with the demand for energy storage. Peaking generation allocation of 9 000 MW is a space that batteries can also play in, Mojapelo notes.

Mineral Resources and Energy Minister Gwede Mantashe also recently announced that companies will be allowed to self-generate with much lighter regulatory hurdles to cross, as long as they are registered to do so. This decision also creates a massive opportunity for energy storage, Mojapelo states.

“You’ve got all of the enablers necessary to build quite a sizeable primary energy industry that’s not looking only at our own requirements but that’s also looking at a global market place. As a company, we hope to take the lead in that initiative.”

Bushveld believes that, owing to the country’s reserves and market, South Africa is likely to emerge as one of the top five countries for vanadium globally within the next few years.

Additionally, Mojapelo encourages industry to “think more boldly beyond just supplying the metals to make the batteries”, and to rather see how the value chain of this sector can be maximised for local benefit, especially considering that $660-billion in capital expenditure is forecast to be spent in this sector over the next 20 years.

To become successful in this field, he tells Engineering News & Mining Weekly that South Africa should focus on where it is heading in terms of a production base, and not consumption.

“As a consuming market, we’ll always be fairly small. On energy storage, I think we have an opportunity to be quite big and . . . can start to see a significant increase in consumption of vanadium locally,” Mojapelo adds, highlighting, however, that South Africa’s opportunity is to use the resource bases, processing infrastructure and expertise that it has to build an industry that is export oriented, and is supplying the global market.

This is where real growth can be achieved, he says.

The Aim-listed producer has plans to more than treble its current production of ~3,000 mtV/y of Nitrovan (a trademarked vanadium nitrate micro alloy product), to about 8 400 mtV/y of vanadium products over the next four years through using its primary processing infrastructure, comprising Vametco and Vanchem.

On the road to reaching this goal, however, Bushveld intends to refurbish Vanchem and expand production at Vametco.

Currently, Vanchem is operating a single kiln. A further two existing kilns will be refurbished to enable an increase in output, Mojapelo confirms.

Over the short- to medium-term, Mojapelo notes that the top investment priority for Bushveld is to increase its production at Vametco, while simultaneously refurbishing Vanchem in an effort to get it to produce about 4 200 mtV/y.

Getting the Mokopane vanadium project to production will also be a key priority, as it will supply the vanadium to Vanchem. Beyond this, Bushveld intends to spend money implementing its strategy for its energy storage platform, Bushveld Energy.

Relating to other energy storage initiatives, Bushveld is currently building an electrolyte plant in East London, where it will produce 200 MWh/y of electrolytes.

The plant will cost about $10-million, or R150-million, including debt and equity, Mojapelo tells Engineering News & Mining Weekly.

Investments into battery companies will also take place in an effort to establish a platform that will be used to mobilise other funding from third-party sources to support the upscaling of VRFB manufacturing in South Africa.

“We’re targeting companies that have a proven product that is in commercial deployment but just requires scale-ups in terms of production – that is going to be quite key to respond to the current market and coming up market need, but also to help to drive the costs of the VRFBs down through economies of scale,” Mojapelo adds.

Meanwhile, despite environmental, social and governance (ESG) being what some call “a woolly issue” for the global mining industry, Mojapelo says this agenda is gaining traction.

“Many companies will tell you that increasingly the investors want to know what they’re doing from an ESG point of view and that’s becoming key to them being able to access capital.

“The big driver of that of course includes things like the need to lower carbon footprint, the need to build more shared value within the mining industry, and the importance of governance and how the industry operates.”

Commenting on why this is beneficial for Bushveld, Mojapelo tells Engineering News & Mining Weekly that the producer is “a business that will play a massive role within the ESG space”, as its energy storage is a major ESG enabler.

“It’s not just about how we operate and how we mine as a company, but with the products that we’re generating and unlocking, we’re helping an entire industry in our view to attain the ESG goals that are so important.”