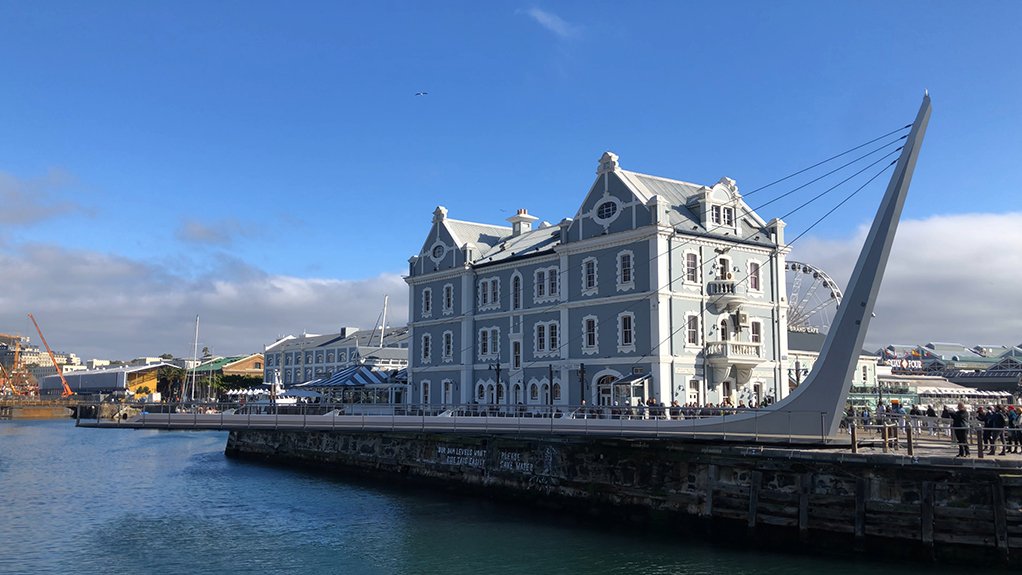 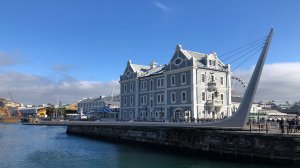 “Ingenuity, creativity and excellence were showcased during the live stream event, with the coveted titles of Overall Winner and Bridge Category Winner awarded to the team from the New Replacement Swing bridge at the V&A Waterfront,” said SAISC chairperson Nicolette Skjoldhammer in a press release that was released last month.

Situated in South Africa’s oldest working harbour, the V&A Waterfront is a mixed-use development offering visitors a range of experiences – from entertainment and shopping to dining and accommodation.

The V&A Waterfront’s 22-year-old swing bridge opened and closed up to 60 times a day, carrying up to 2.4-million people a year. The 2 m-wide walkway was no longer sufficient to cater for the rising numbers of pedestrians.

Steel and fibre-reinforced polymer were considered at the early stages of the project, as they were the only materials that were light enough to limit the loads on the moving mechanical parts and the foundation size. However, as the design progressed, steel was the obvious choice because of the architectural freedom it provided and because of the expertise and capacity that exists in Cape Town to fabricate and erect complex steel structures.

The new swing bridge spans 40 m and the deck is cable-stayed, with a single plane of four locked coil cables connecting to a central, upstand spine beam. The spine beam is a 500 mm-wide fabricated box with a total depth of 800 mm, but only 470 mm protrudes above the top of the deck.

The reclining pylon is in the continuity of the main central beam and its stiffness transfers the cable loads into the piled substructure. The steel, with timber deck, is rotated on a slewing bearing, which is stressed down onto a doughnut-shaped pile cap by 34 vertical freyssibars.

“It was not only about technical engineering but also about design, architecture urban design and people’s experience. Everyone was passionate about the end-product, and because of that, a huge amount of effort went into it,” project nominator engineering consultant SMEC South Africa structures general function manager John Anderson tells Engineering News.

The first criterium was the functionality and reliability of the new bridge, as it had to be as efficient, effective and reliable as the existing bridge. Although the new bridge’s pedestrian capacity across the channel had to be double that of the previous bridge, the client required that it should match its predecessor’s speed of operation.

This meant that it had to open in 90 seconds and close in 100 seconds. The bridge needed to open the full width of the channel, with infinite headroom. Further, the bridge was required to swing freely under ship impact rather than try to resist it.

Secondly, the budget was a fixed constraint, Anderson notes. “This was the driving force for choosing an appropriate type of moving bridge,” he adds.

Thirdly, the construction of the bridge could not disrupt the daily operation of visitors to the V&A Waterfront.

“It was imperative that the disruption caused by construction was minimised. This was such a fundamental issue that it was a major factor in deciding upon the new bridge’s location and the construction,” says Anderson.

“The final product is an energy efficient and reliable solution, and the detailing and specifications of the steelwork, connections and paintwork are all aimed at extending the design life of the structure.”

Throughout the construction and design of the bridge, the project team invested significant effort into reviewing the energy, maintenance, material and labour costs of building and running the new swing bridge, Anderson concludes.