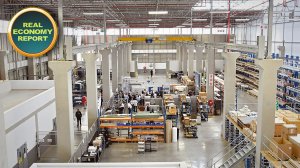 Bosch Rexroth Group executive president and CFO Dr Markus Forschner says the company moved into the HUBB to set the highest standards in the industry. Bosch Rexroth customers benefit from multi-technology solutions, all under one roof, while the customer day is proof of its customer-oriented approach.

The group showcased its numerous modern engineering and production facilities that have been the heart of the group’s operations for the past year.

Working demonstrations of the various technologies and systems offered by the group – in addition to a large collection of products and components from about 30 of the international brands which it represents across Africa – were on show at the companies’ assembly areas.

Forschner highlights that the one of the areas that the company has gained momentum in recent years, is the training solutions which it offers to employees – who are the heart of the organisation.

Bosch Rexroth continues to invest in new locations in Africa, and is building up local value-add activities, such as the repair of pumps, motors and hydraulic cylinders for operations in the larger part of the region.

The South African National Blood Service has announced plans to use drone technology to transport blood from blood banks to hospitals in rural areas. Natasha Odendaal tells us more.

The Tron unmanned aerial vehicle, a South African first, is currently preparing to undergo proof of concept to secure a licence from the South African Civil Aviation Authority.

The highly specialised aircraft features the handling capabilities of helicopters and the efficient aerodynamics of aeroplanes.

It is capable of flying at an altitude of 100 m to hospitals as far away as 100 km, delivering up to four units, or 2 kgs, of lifesaving blood.

SANBS is working with the SACAA on the licence process, as the drone is a hybrid model between a helicopter and an aeroplane.

The parties are undertaking a proof of concept process, which comprises a flight of 9 km from Sebokeng Hospital Blood Bank and Kopanong Hospital, in Vereeniging.

Once the licence has been obtained, the plan will be to expand the project across South Africa and into rural areas in KwaZulu-Natal, the Eastern Cape and the Western Cape.