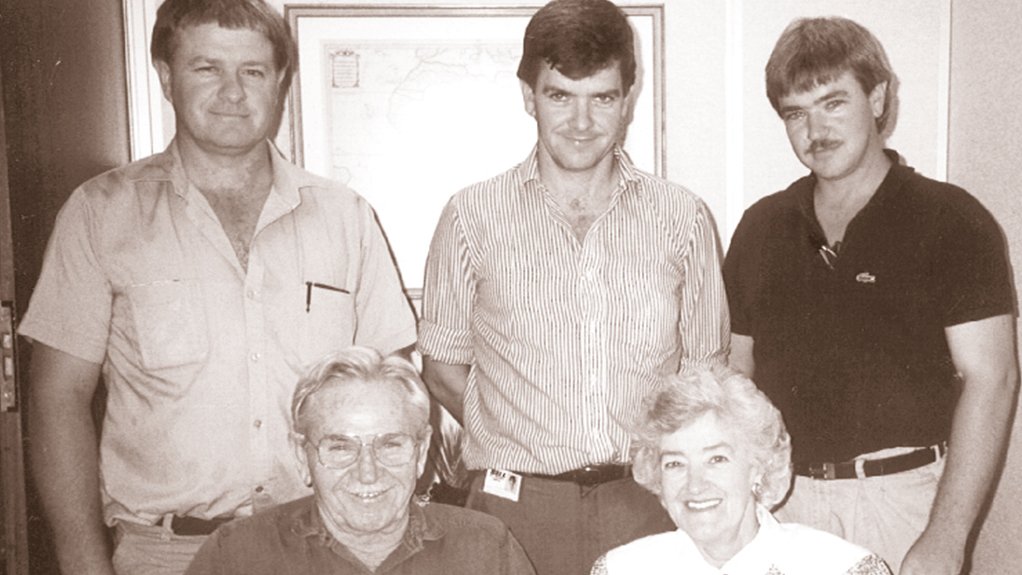 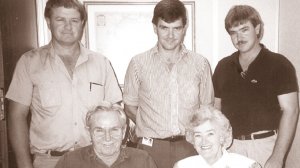 An archive photo of the Bell family (Back left to right) Brothers Peter, Gary and Paul (Front) Irvine and Eunice

Year of Formation and Background to Founding:
Bell Equipment’s roots date back to 1954 when Irvine Bell established a small engineering and agricultural equipment repair service in Empangeni, northern KwaZulu-Natal. A fitter and turner by trade, he and his new bride, Eunice, had moved to the town four years earlier when Irvine joined Ukhulu Sugar Estate as maintenance engineer and started a repair shop.

Such was the volume of private work at the repair shop that in 1954, with Ukhulu’s blessing, IA Bell & Co was founded. Joined in the business by Eunice, brother Rob and brother-in-law Malcolm Campbell, they instilled the strong family roots and values that have endured to the present day.

Irvine’s innovation and vision provided sugar cane farmers of that time with solutions to improve efficiencies on their farms, among them a self-loading cane trailer and an overhead transfer cane. A tri-wheeled cane loading machine followed in 1964, an invention which revolutionised the sugar farming industry and set Bell on the path to becoming an original equipment manufacturer (OEM).

Observing the deficiencies in the adapted farm tractors used as transporters in the sugar and timber industries, Irvine’s eldest son Peter Bell conceptualised a purpose-built haulage tractor which went into production in 1977. Together with a range of job matched trailers, the Bell Rigid Tractor, with its truck-style drivetrain and steel chassis, found a ready market in cane and timber haulage. This soon expanded into earthmoving applications.

Eventually, Bell recognised the advantage of having its own dedicated outlets to provide factory direct support and the Bell Customer Service Centre support network was born. Beginning with a branch in Johannesburg, Bell Equipment soon had national coverage and within a few years’ exports to neighbouring countries put Bell firmly on the map.

Around that time Articulated Dump Trucks (ADTs) imported from Europe arrived in South Africa. These were effective and versatile machines, but Bell nevertheless saw room for improvement, fine tuning their design to better cope with the harsh operating conditions common in Africa.

The launch in 1985 of Bell Equipment's first ADT, the 25 t model, was a resounding success and led to new models expanding the range. By 1989, with the doubling of the Richards Bay plant’s capacity, the flagship 40 t capacity ADT was launched.

In 1995 Bell Equipment listed on the Johannesburg Stock Exchange. Acceptance of the Bell ADT product continued to grow globally, resulting in significant increases in manufacturing capacity in 2000 and 2008 along with the opening of a German assembly plant in 2003.

Investment in support operations followed in 2008 with a new Global Logistics Centre at the company’s Jet Park facility and an intensive customer service centre upgrade, which concluded in 2015.

Company Mission, Products & Services:
To be a growing, sustainable capital equipment solution provider of choice Bell strives to provide appropriate, low-cost-per-tonne equipment solutions and support to meet customers’ needs. In this way Bell looks to give them the best ownership experience and build long term relationships as it has the philosophy that if “our customers succeed, so will we”.

The Bell business and products are defined within four groupings.

Firstly, Bell is a global ADT specialist and innovation pioneer offering the largest range of articulated trucks on the world market. This includes traditional 6x6 ADTs, a niche offering of 4x4 ADT crossover trucks and the Bell Versatruck programme, which uses the ADT platform as a base for tailor-made solutions such as water or fuel tankers or timber trucks.

In southern Africa, as part of Bell Equipment’s strategy to be Africa’s preferred equipment supplier, the company has partnered with acclaimed global OEMs including JCB, Kobelco and Finlay to provide customers with a full range of material handling equipment through one point of contact.In addition, Bell manufactures cost-effective equipment for the agriculture and forestry industries, such as a range of purpose-built rigid haul tractors as well as articulated tractors and infield self-loading forwarders based on the Bell ADT. The F-series tri-wheeler, a founding product, is available as a cane loader, timber logger or fitted with forklift tines.

Through the Matriarch Equipment division, started by Irvine’s grandsons Justin and Ashley Bell, the company offers specialised niche products for agriculture and forestry. Matriarch offers the professional conversion of Kobelco excavator carriers for a wide variety of forestry applications.

Number of People Employed:
Bell Equipment employs almost 3 000 people globally, over 2 500 of which are based in South Africa.

Greatest Corporate Achievement:
The company’s greatest corporate achievements are the innovations it has pioneered as an ADT specialist and its advancements as a global manufacturer. These have enabled Bell to compete against imported products from significantly larger companies and overcome the perception that products from Africa are inferior.

The Bell E-series ADTs are the most technology advanced on the market and can integrate with a pedestrian detection system (PDS) and crash avoidance system (CAS), which has laid the foundation to provide an ‘autonomous ready’ truck. This concept is currently being trialled on test sites in Europe and the US.

Bell machines all carry a ‘Built with pride in Africa’ badge as the company is proud that some 75% of what it sells in South Africa is manufactured in the country. The company designs its own products and has its own engineering team, with a focus on increasing the local content of its products – a Bell ADT currently has a local content of over 70%.

Hope for the Future:
For South Africa to grow economically, so local companies can create employment and increase skills levels for the betterment of all citizens. If South Africa succeeds, so do we all.