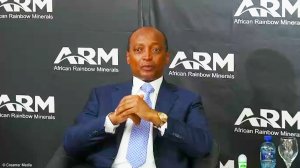 “You’ve got to replace the orebody that you’re mining with an equally world-class and an equally competitive orebody,” said Motsepe at ARM’s presentation of cash-rich interim results, which include a 100%-higher interim dividend of R10 a share. (Also watch attached Creamer Media video.)

Headline earnings for the six months to December 31 were up 134% to R5-billion, boosted by iron-ore and platinum group metals. Net cash on hand was up by 29% to $4.8-billion.

“We’ve learnt over the years that in times when things are fine, we’ve got to invest and then also look after our shareholders, as well as all our other stakeholders, the communities that live near our operations, the workers as well as the obligations we have to inclusivity, and to make sure that the mining industry contributes to a globally competitive industry.

“The commitment for the mining industry to be globally competitive is critically important and for ARM to be a competitive dividend payer with an increased share price,” Motsepe said.

“We have to focus to ensure that the commitment to zero fatalities becomes a reality,” said Motsepe.

ARM suffered two fatalities in the six months. On September 13, Dennis Hlengani Mdaka, a rock drill operator at Modikwa, was fatally injured when he entered an unventilated development end at South 2 shaft, and on October 7, Johannes Mahlalela, a team leader at Modikwa, sustained an injury to his right arm during a shift. Although he was stable after an operation, Mahlalela passed away in hospital on October 11 following medical complications. Five ARM employees also succumbed to the Covid-19 pandemic in the period.

“Our operations navigated these turbulent times well, responding in an agile and responsible manner,” the JSE-listed company stated in a release.

Rhodium comprised 47% of the Two Rivers basket price and 45% of the Modikwa basket price.

Production is expected to cease at Nkomati nickel mine this month when the opencast mine will be placed on care and maintenance in preparation for closure.