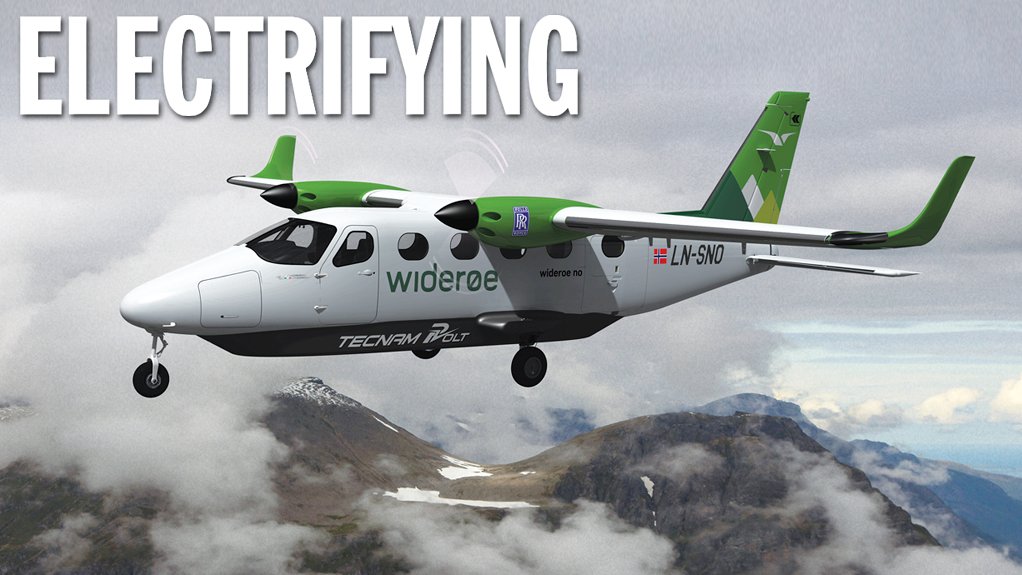 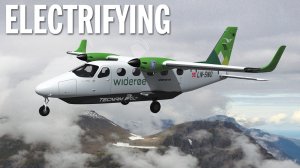 Although air transport accounts for only 2% of human-produced carbon dioxide, the aerospace industry is not complacent. In October 2016, the International Civil Aviation Organisation (ICAO) adopted the Carbon Offsetting and Reduction Scheme for International Aviation (Corsia), which aims to cut 2005 levels of aviation carbon emissions by 50% by 2050. Corsia is an initiative for States, but the international industry initiative, the Air Transport Action Group, has endorsed the objectives of Corsia. Various options to achieve this objective are being developed. Among the most radical is electric propulsion for aircraft, whether hybrid-electric or all-electric. A lot of work is now being done on these technologies.

Hybrid-electric propulsion involves fitting an aircraft with a conventional gas-turbine engine which is used not to directly power the aircraft but as a turbogenerator to provide electrical current to the electric motors that drive the aircraft’s propellers or engine fans. The aircraft could also be fitted with batteries which would serve to provide extra power at key points in the flight, such as takeoff. The turbogenerator would recharge these batteries in flight. This approach greatly reduces, but does not eliminate, the aircraft’s carbon emissions.

One of the largest hybrid-electric technology demonstration projects was the joint Airbus/Rolls-Royce/Siemens E Fan X, which was also the first of its kind in the world. This involved modifying a four-engined BAE Systems Avro RJ100 regional airliner, fitting it with a generator, a high-power battery pack, an appropriate electrical system, the necessary flight test and telemetry system and replacing its starboard inner engine with an electric motor. The project was launched in 2017 but terminated in April last year, before the aircraft had flown. Airbus states that the project succeeded in achieving its three main initial objectives: the launch and testing (presumably ground testing) of the possibilities and limitations of a serial hybrid-electric power system in an aircraft; obtaining “invaluable insights to develop a more focused roadmap on how to progress on our ambitious decarbonisation commitments” (in the words of the Airbus website); and the establishment of a basis for the acceptance of alternatively powered commercial aircraft by both the industry and regulators. E Fan X was a victim of the Covid-19 pandemic, which forced both Airbus and Rolls-Royce to concentrate on their priority activities.

Boeing started a study of hybrid-electric propulsion as far back as 2008, under the US National Aeronautics and Space Administration- (Nasa-) funded Subsonic Ultra Green Aircraft Research (SUGAR) programme. But the Boeing project, known as SUGAR Volt, remains a concept, with only a wind-tunnel model tested so far. Boeing is also involved in Nasa’s SUGAR Freeze project, which would develop a partial hybrid-electric propulsion system that would use liquefied natural gas fuel to power the main engines; these would be connected to a fuel cell that would produce electricity to power a rear-mounted thruster that would be used to ‘re-energise’ the aircraft’s wake, thereby reducing its drag and so cutting its fuel burn. But the SUGAR programme seems to be progressing very slowly.

Boeing was also involved with, and invested in, US startup company Zunum Aero to develop a hybrid-electric 6- to 12-seat regional aircraft. French engine manufacturer Safran would have supplied the turboshaft engine that would have acted as the generator. But Zunum ran out of funds during 2018 and effectively collapsed. Late last year, the company (which still legally exists) launched a lawsuit against Boeing, alleging that the giant aerospace group was guilty of breach of contract, fraud, technology theft and misappropriation of trade secrets, causing Zunum’s collapse.

There has also been at least one hybrid- diesel-electric aircraft project. This was a two-seat light aircraft jointly developed by Siemens and Hungarian company FlyECo, designated the Magnus eFusion; the prototype first flew on April 11, 2018, but crashed on May 31 that same year, killing both occupants – the electric power system provided by Siemens was not to blame. (The German group sold its electric aircraft propulsion business to Rolls-Royce in 2019.)

Interestingly, in its list of 37 active electric and hybrid-electric aircraft programmes worldwide (valid as of April 1 this year), ICAO records only five hybrid-electric projects, plus the E Fan X, marked as cancelled, plus the Magnus eFusion project. Perhaps the technology is falling out of favour. In very strong contrast, 31 electric projects (plus one marked as cancelled) are listed. There are believed to be many more, which have not yet made it on to ICAO’s list. Many, if not most, of these electric flight projects are focused on the potential urban air mobility (UAM – ‘flying car’ or ‘flying taxi’) market, which is a topic on its own.

Electric propulsion systems on aircraft would totally eliminate direct carbon emissions, cut fuel costs by as much as 90%, reduce maintenance by 50% and cut noise by almost 70%. On the other hand, the best batteries available today have an energy density of 250 Wh/kg, compared with the 12 000 Wh/kg for conventional jet fuel. This limits the range of battery-electric-powered aircraft. On the other hand, about 50% of all flights, worldwide, cover distances of less than 800 km. It is expected that battery-electric aircraft will be able to achieve this range by the middle of this decade.

Rolls-Royce, significantly, has not cut its investments into electric aircraft propulsion technologies. One initiative, the ‘Accelerating the Electrification of Flight’ (Accel) programme, seeks to stimulate the development of advanced battery and power plant technology. Accel is a UK joint industry and government project, with the Aerospace Technology Institute (a public-private partnership), government agency Innovate UK and the country’s Department of Business, Energy & Industrial Strategy providing half the funding. The programme also embraces two other British companies, axial-flux electric motors and controllers manufacturer YASA and tailor-made aerospace battery systems technology and engineering business Electroflight.

Accel’s showpiece is the single-engined ‘Spirit of Innovation’ all-electric technology demonstrator aircraft. This is a single-seat high-performance propeller-driven aircraft intended to set a new world-speed record for all-electric aircraft of 300 mph (483 km/h) or more. It is powered by a 400 kW electric powertrain, using the most up-to-date energy storage technology, specifically developed for the world speed record project. The aircraft has successfully completed its taxiing tests and is expected to fly in the near future.

More prosaically, Rolls-Royce recently announced that it had also entered a partnership with Italian aerospace company Tecnam, and Norwegian regional airline Widerøe, to develop and bring into commercial service (during 2026) the all-electric propulsion P-Volt aircraft. The P-Volt will be a short- to medium-range twin electric- engined high-wing commuter aircraft capable of carrying nine passengers and/or cargo, or undertake medical evacuation and special missions. All systems on board the aircraft will be entirely electrical. The P-Volt’s airframe is based on that of the Tecnam’s current flagship type, the nine- passenger P2012 Traveller. Prior to the Covid-19 pandemic, Widerøe operated some 400 flights a day between 44 airports, with 74% of these flights involving distances of less than 275 km.

Airbus is also seeking to push the development of all-electric aircraft technology through its support for the new Air Race E series of air races, which will see eight electrically powered racing planes compete head-to-head, flying around a tight, closed, 5 km circuit, at an altitude of just 10 m above ground level. Airbus is the series’ founding partner. The start of the new series has been significantly delayed by the Covid-19 pandemic, but might start later this year, and certainly by next year. Airbus itself has been doing research into electric aviation since 2010, but most of its corporate endeavours are currently focused on the UAM segment.

On the other side of the Atlantic, Brazilian aerospace major Embraer, in conjunction with local electronics group WEG and Portuguese multinational EDP, has developed a battery- electric technology demonstrator aircraft, based on Embraer’s highly successful EMB-203 Ipanema crop-dusting aircraft. It should make its maiden flight this year.

Further north in the Americas, Nasa is using another Tecnam type, the P2006T, as the basis for its X-57 Maxwell all-electric research aircraft. The performance of the X-57 will be compared to that of a standard P2006T to determine the efficiency of the electric aircraft. The X-57 will be powered by 14 electric motors, 12 small (six spread along each wing, on its leading edge) and two large (one at each wingtip). The small motors will all be fitted with ‘fold-in’ propellers; they will provide not so much extra power as extra airflow across the wing, increasing lift during takeoff and climb, and during low-speed flight. But in cruising flight they would be switched off and their propellers folded back. This allows the aircraft to fly using a much smaller wing (that which will be fitted to the X-57 will be only 42% of the size of the original P2006T wing). A smaller wing means less drag, increasing range. Power will come from two packs of lithium-ion batteries, each with a mass of about 181.5 kg, which together will supply 23 kW/h of energy.

The alternative to battery-electric power is hydrogen fuel-cell-generated electric power. This option is also being pursued, with Anglo-US company ZeroAvia currently the leader in this field. Last September, it successfully carried out the world’s first flight of a ‘commercial-grade’ aircraft powered by a hydrogen fuel cell. The aircraft was a modified Piper Malibu, a single-engined six-seater, and flew at Cranfield Airport, in the UK. It has since been fitted with a new hydrogen fuel system, with greater capacity, to give the aircraft a maximum endurance of one hour and so greater range. It is currently undergoing a test programme prior to making its first cross-country flight, later this year.

Designated HyFlyer, the ZeroAvia project has been partly funded by the British government, through its Aerospace Technology Institute programme. Other key partners in the project are UK companies the European Marine Energy Centre (EMEC) and Intelligent Energy. EMEC provides the hydrogen, while Intelligent Energy is a developer and manufacturer of proton-exchange membrane hydrogen fuel cells. (ZeroAvia and EMEC have also developed the demonstrator Hydrogen Airport Refuelling Ecosystem at Cranfield Airport. This is, in small scale, a complete system of green hydrogen production, storage and fuel cell-powered aircraft refuelling.)

This success led to ZeroAvia receiving, in December, a £16-million ($21.4-million) grant from the UK government, for the next stage of the programme, called HyFlyer II. This will develop a 600 kW hydrogen-electric powertrain for a 19-seater aircraft. This powertrain will be ‘platform agnostic’, meaning that it could be fitted to existing aircraft in this size category, such as the Cessna Caravan or the Viking Air Twin Otter. The plan is to make this powertrain commercially available in 2024.

The company is also planning to develop a 2 MW hydrogen-electric powertrain to power regional airliners with 50 or more seats. By the end of March, this large-scale engine programme had received an extra $24.3-million from private investors (including British Airways and Shell Ventures), taking ZeroAvia’s total private funding to more than $53-million. This powertrain could be on the market by 2026. The following step would be a powertrain designed for 100-seat single-aisle airliners, hopefully commercially available in 2030.