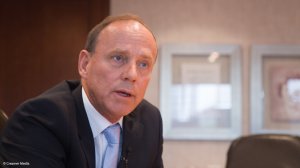 Energy and chemicals group Sasol has again indicated a desire to participate in South Africa’s upcoming gas-to-power programme, confirming on Monday that it had responded to the Department of Energy’s recent request for information and that it was also considering investment options along the entire gas-to-power “value chain”.

Sasol already produces electricity using gas as a feedstock in Mozambique and at its Secunda and Sasolburg energy and chemical complexes in South Africa.

Executive VP Southern African Operations Bernard Klingenberg told Engineering News Online on Monday that it was currently in a position to meet about 70% of its internal electricity needs and that it had also entered into power purchase agreements (PPAs) with Eskom for some of that production.

But speaking during the group’s 2015 results presentation, president and CEO David Constable indicated that the JSE-listed group could consider opportunities outside of electricity production, indicating that it might also play a role in the importation of liquefied natural gas (LNG) and/or the regasification of that LNG.

The imported gas, he indicated, could be supplied to gas-to-power independent power producers with plants of around 3 000 MW in size.

Klingenberg said it was premature to say for certain whether Sasol would take an equity position in any gas-to-power infrastructure, but confirmed that it was considering various options, describing the opportunities as “very exciting”.

Constable expected in several organisations and joint ventures to bid to import LNG, as well as to convert the gas into electricity and indicated he expected the procurement processes to begin in earnest during the 2016 calendar year.

“We are very keen on that opportunity and improving the power situation in the country and also providing gas for other customers,” Constable said.

A recent McKinsey & Company study estimated that the development of a natural gas industry could boost South Africa’s gross domestic product by between R138-billion and R251-billion by 2030 and create up to 328 000 direct and indirect jobs.

The study argued that South Africa should urgently pursue gas to bridge an electricity supply gap of between 6 GW and 10 GW that could arise by 2025 as older coal-fired power stations are decommissioned. However, the country’s Integrated Resource Plan for electricity, which was currently relatively light on gas, would also need to be updated for the country to take advantage of the opportunity.

Energy Minister Tina Joemat-Pettersson indicated last week that gas was an “immediate focus” for government and promised that the long-awaited Gas Utilisation Master Plan, which would offer a road map for South Africa’s development of a gas industry, would be published soon.

Klingenberg said it was still uncertain where the LNG importation terminal or terminals and regasification facilities would be located, with Saldanha Bay, Coega and Richard Bay all mooted as possibilities.

“For Sasol, there is potentially an opportunity to do gas-to-power, but also to bring additional gas into the network to augment supply to the gas industry in South Africa,” he said, adding that the LNG price outlook was strongly in favour of importers.

Sasol was also hoping to increase gas production out of Mozambique, with some of that additional capacity possibly entering South Africa in the form of either natural gas or electricity.

In February, the group submitted a new field development plan for the Pande and Temane gasfields to the Mozambican authorities. If approved, the way could be opened for the development of an integrated oil, liquid petroleum gas and gas project adjacent to the existing production sharing agreement area. In addition, it could trigger an investment into a fifth train at Sasol’s central processing facility.