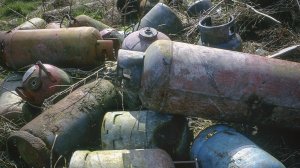 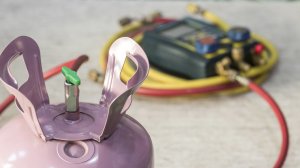 TIME TO SCRAP THIS PRACTICE Disposed cylinders create about 3 150 m3 scrap metal and can explode if not thoroughly evacuated
UNDER PRESSURE The ban on disposables is being considered in consultation with industry stakeholders, but is facing vocal pushback from end-users

Despite various heating, ventilation, air-conditioning and refrigeration (HVAC-R) industry participants contesting the banning of disposable gas cylinders in South Africa for years, there is no indication of a decision on the matter being reached.

“We need to follow the example of many developed economies in this regard and phase out the use of disposable cylinders in SA soonest,” adds South African Institute of Refrigeration and Air-Conditioning (Sairac) president Marius La Grange, claiming that the increased pressure on all industries to be more conscious of their contributions to climate change makes it an urgent matter.

Disposable cylinders are low-cost, specially manufactured single-use containers made of thin sheet metal and are not certified for reuse. They are charged with refrigerant, then sold for use in servicing or commissioning equipment. Thereafter, they are discarded.

This leads to large quantities of scrap metal being generated, which might be more acceptable if scrap metal merchants were less reluctant to accept the depleted cylinders.

“You can’t simply dump them in a landfill without evacuating them first, because it’s illegal. Moreover, scrap metal merchants often won’t accept them because of the residual gas inside, which makes them dangerous,” Richardson explains.

He adds that this is harmful to most systems and does not often result in completely empty containers when a system is already charged. The balance of the synthetic refrigerants remaining in the cylinders is released into the atmosphere when the containers are scrapped.

“The volumes per cylinder might seem insignificant, but consider the millions of disposable cylinders used and it adds up to a significant direct impact on global warming,” he says.

In a report submitted to the then Department of Environmental Affairs by refrigerant distributor A-Gas in August 2015, it was estimated that about 225 000 disposable cylinders are sold in South Africa every year, of which about 70% are filled with R22, a hydrochlorofluorocarbon (HCFC).

The report states that the heel remaining in the cylinders after disposal is anywhere between about 400 g – about 2.94% of the original charge – and 680 g – about 5% of the original charge. This equates to a significant amount of ozone depleting substances, including carbon dioxide and other harmful emissions, being released into the atmosphere if the cylinders are not properly disposed of.

There is also the estimated 3 150 m3 scrap metal produced, which often ends up in landfill.

Richardson explains that proper disposal is a somewhat arduous procedure, which a large number of end-users neglect to follow. It requires that the cylinders be thoroughly evacuated of all residual gas through the implementation of a total vacuum, and then punctured to ensure that they cannot be reused. This needs to be carried out carefully by qualified professionals.

“Sometimes, however, end-users modify the one-way valves on the cylinders so that they can be reused, which is extremely dangerous and illegal,” he warns.

This process involves bypassing an integral safety device built into the disposable cylinder by the manufacturer to prevent over-pressurisation. This practice can lead to explosions.

Further, it is difficult to assess the consistent quality of the gas when it is delivered in disposable cylinders.

Richardson notes that, although the Department of Environment, Forestry and Fisheries (DEFF) is still actively considering the ban in consultation with industry stakeholders, it is facing vocal pushbacks from end-users who claim that it would damage the economy and take away jobs.

For example, in an open letter to the DEFF, published in HVAC-R industry publication Cold Link Africa in 2018, HVAC-R services provider AC&R Components owner Trevor Dyer claims that the call to ban disposable cylinders is not about protecting the environment at all, but rather an underhanded bid for certain industry participants to gain a larger market share.

“I don’t think we should accommodate an informal sector that re-gasses motor vehicle air-conditioners – for example – without attending to the reason for the leak, at the cost of the environment,” La Grange rebuts.

He says that, ideally, synthetic refrigerants in disposable cylinders should not be sold over the counter to those not in possession of the required South Africa Qualification and Certification Committee gas registration.

The alternative to disposable cylinders is to supply refrigerants in reusable cylinders, also known as reclaim cylinders, which are in short supply, according to Dyer, and which could lead to hundreds of businesses not having their refrigeration service needs met by the HVAC-R industry.

Conversely, Richardson believes that it is merely end-users, who use the disposable cylinders on a daily basis, wanting to do the job in the easiest way possible.

However, he is confident that, eventually, the ban on disposable cylinders will be implemented.

La Grange believes there is much potential for the local industry to provide supplies and services when disposable cylinders “inevitably” become illegal.

He believes that this would translate to training centres having greater demand for their specific services as well, to ensure that the local industry and small business owners can provide these services at a high standard.