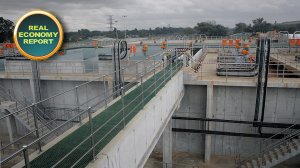 Sashnee Moodley:
Water and Sanitation Minister Nomvula Mokonyane has officially visited the Eastern Basin acid mine drainage treatment plant, in Springs, where she heaped high praise on the facility and its operators. Ilan Solomons was there and filed this report.

Ilan Solomons:
Speaking during a visit to the plant last month, the Minister highlighted that the plant formed an integral part of the Department of Water and Sanitation’s R12-billion long-term plan to combat the risks posed by acid mine drainage.

The opening of a third high-density sludge treatment plant in Gauteng was not only addressing the challenge of acid mine drainage, but also constituted one of a critical number of ways that government sought to ensure the continued supply of water to the province, said Mokonyane.

Van Wyk further unpacks the core components that make up the plant, which services a surface area of about 768 km2.

Ilan Solomons:
Van Wyk notes that the plant which is operated by industrial water treatment company Tecroveer Thanda Manzi, under the auspices of the of State-owned water management and project implementation body, the Trans-Caledon Tunnel Authority is producing treated water that is improving the quality of the water that is being transferred into the Vaal river system.


A new R8.9-billion housing development project on the East Rand of Gauteng is set to provide 22 000 houses over the next seven years.
MMC for Human Settlements Lesiba Mpya

As Clover Industries works its way through muted trading and economic conditions, the JSE-listed group is progressing a number of strategies to set it back on a growth path.
Clover CEO Johann Vorster