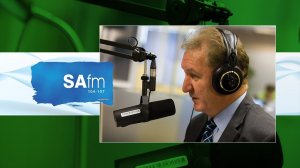 Kamwendo: Eskom is receiving offers of help from big and small companies.

Creamer: It is amazing how the corporate world now is trying to help, because it is in their own self-interest. If they continue with load-shedding they have terrible results. They are saying now that they would do everything to help Eskom. Big and small. We know that Glencore has been working around the clock to provide coal to Eskom on a 24/7 basis.

This week Anglo American said that they are prepared to go in there and offer everything they can. They don’t want to do it arrogantly, it is not as if they are saying they know everything. Even smaller companies are saying that they will be prepared to cut their price of coal. We know the price of coal is so huge and we see Eskom paying R55-billion a year on coal and they have got to get the right coal.

We see Menar saying that they are prepared to give them the right coal at the right price. They have got a lot of new projects coming through and these are shallow projects, so they can afford to cut their price, which is just what Eskom needs at the moment.

Kamwendo: A big new zinc project in the Northern Cape may be forced to get electricity outside of South Africa.

Creamer: This is heart breaking, because we know Vedanta, of India, invested a lot of money in our Northern Cape in a zinc project and we always thought that there will be full beneficiation there, because the approach was one of adding value all the time. But, they might not be able to add any value.

We have always said that we don’t want rock leaving the country, we want it to be beneficiated, but you can’t do that unless you have got electricity certainty. It is just certainty and paper work that they are looking for, really. They are prepared to bring in a lot of their own power. They are prepared to bring in sun power which is great in the Northern Cape and wind power, but they have to have a policy a hybrid arrangement with Eskom. They have got to know that there will be electricity gap-filling. When you bring in your own wind and your own sun energy, there will be gaps and you will have to get electricity from the grid.

So, you have got to have a fixed arrangement with Eskom and Nersa and this is not available at the moment. I am saying that it is not rocket science and they can work this out very quickly. But, with the uncertainty now, Vedanta is saying, rather lamentably in London this week, that they may have to process all their zinc ore outside of the country.

Creamer: It was amazing. This was the media meet with journalists, the end of the year and the enthusiasm there I haven’t seen for a long time. Mark Cutifani was saying South Africa is Anglo’s best performing mining jurisdiction. He was saying that when shareholders say to him, ‘what about your SA problems’, he stops the conversation and turns to them and gets into a debate with them, because he says that the margin he is getting here is 30% to 40%.

He is getting a 20% to 30% return on investment. So he is saying to shareholders, ‘What South African problem are you referring to?’ The world has changed and although South America was the darling not long ago, a lot of the South American countries are having tremendous civil unrest. I was in Chile in October and I couldn’t believe what happened there, the place just erupted and they were burning busses and trains. That particular confusion is still going on and having a big impact in Chile.

There is also that sort of unrest in other parts of South America to the point where the Democratic Republic of Congo (DRC) is now seen as possibly a better copper destination then Chile, because of all the unrest. We saw that billionaire Robert Friedland said this week that, from his point of view, the DRC is actually more attractive as a mining investment destination at the moment than the likes of Chile, where you can also  get copper. The thing is with the DRC it is also very copper rich and the copper is very close to the surface, so there are a lot of advantages.