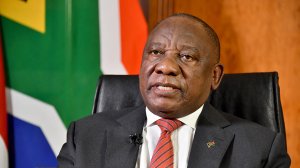 President Cyril Ramaphosa warned on Monday that there would be no quick fixes for the economy as government gears up to launch its Sustainable Infrastructure Development Symposium (Sidssa) on Tuesday.

The Sidssa is organised by the Investment and Infrastructure Office within The Presidency and it is aligned with Sustainable Development Goals objectives and South Africa’s National Development Plan to ensure access to greater and economical sources of sustainable funding.

He said the country would be better suited to meet its developmental aspirations and revive the economy through the delivery of sustainable and fit-for-purpose infrastructure, while creating jobs during this vulnerable period.

“This infrastructure investment forms an integral part of our recovery effort. This will be bolstered by the reduction of interest rates by the South African Reserve Bank, support extended to businesses during the pandemic and regulatory relief for the financial sector, among others,” Ramaphosa highlighted.

He said the Presidential Youth Employment Intervention, and the Expanded Public Works and Community Works Programmes will be scaled up, while private-sector initiatives that began before the coronavirus outbreak should resume and new ones be implemented.

He warned that tough times were ahead for the economy and added that there were no quick fixes.

He urged South Africans to be realistic about the country’s economic prospects, particularly the time it would take the economy to recover.

“Even the advanced economies will contract substantially because of Covid-19 and it will take a long time for economic output to return to pre-pandemic levels. At the same time we remain optimistic. We will keep trying, because we understand that despite the hardship it has caused, the lockdown was necessary and has saved lives. No price can be put on human life,” said Ramaphosa.

He acknowledged the consequences of stopping economic activity during the national lockdown but reiterated the need to save lives.

He pointed out that South Africa was not the only country struggling with job losses.

The International Labour Organisation has predicted that there will be about 305-million job losses worldwide, with a further 1.6-billion people in the informal economy in danger of losing their livelihoods.

Ramaphosa noted that South Africa was already facing weak economic growth and an unemployment crisis pre-coronavirus and called for the balancing of company sustainability with that of employee’s jobs.

Finance Minister Tito Mboweni will on Wednesday table a revised national budget, where government will reprioritise programmes, public spending and cut back on projects.

“As more economic activity resumes, struggling businesses will be ‘playing catch-up’ to recoup lost productivity and revenue for some time to come. As much as we seek to protect current jobs, we also need to create new ones, and attract new, greater levels of investment. It is imperative that we open avenues for self-employment and entrepreneurship, especially for young people,” he said.

While companies are re-evaluating their investments and expansion plans owing to the coronavirus, Ramaphosa said he hoped that investment commitments made by businesses and the international investors would be honoured.

He welcomed Amazon’s announcement that it would hire 3 000 South Africans, as well as energy storage company Metair’s contracts with Ford Motor Company and pan-African cloud and data solutions entity Africa Data Centres’s acquisition of a hi-tech data centre in Johannesburg.

“We remain optimistic that as we gradually return to normalcy, and as we forge ahead with the economic reform measures embarked upon earlier this year, that the growing investment levels we were seeing before coronavirus hit will slowly but surely return,” said Ramaphosa.