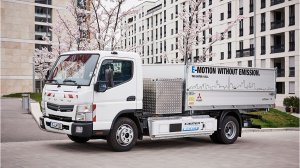 Daimler Trucks has provided a small fleet of electric trucks to the German city of Stuttgart.

MFTBC has, to date, invested E40-million in the development of electric powered trucks.

Over the next twelve months, the municipality of Stuttgart will put four of the five six-ton Fuso Canter E-Cell trucks to the test.

Two vehicles with hydraulic tipper bodies are to be deployed in road construction and landscaping, and two vehicles with box bodies will be assigned to municipal furniture transport and waste disposal operations.

Another Canter E-Cell will carry out parcel deliveries in urban traffic for the Hermes Logistics Company.

“Today’s combustion engine is highly efficient, eco-friendly and, above all, clean. In long-distance transport it will remain the only option for a long time to come,” notes Bernhard.

However, “in urban short-radius distribution, a partial switch to electric trucks will become technically feasible and economically viable within a few years' time. Daimler Trucks is pushing ahead with the further development of this technology”.

“I am firmly convinced that the Canter E-Cell will prove its strengths in the German climate and in the topographically demanding area of urban Stuttgart,” adds Llistosella.

“The Canter E-Cell offers our customers transport services which are not only environment-friendly, but also economical. Our test in Lisbon [Portugal] revealed savings of around E1 000 per 10 000 km, in comparison to diesel trucks.”

“We have decided to make a change to our fleet. All new cars purchased by the municipality will be electric. I think this sends out a very strong signal.”

Hermes Logistics Group Germany MD Dirk Rahn says the electric truck acquisition is part of the company’s long-term climate protection programme, under which it aims to halve its carbon dioxide fleet emissions by 2020.

With a range of more than 100 km, the vehicles exceeded the average daily distance covered by many trucks operating in light-duty, short-radius distribution.

On the basis of the prevailing costs of diesel and electricity during the test period in Portugal, operating costs were up to 64% lower than a conventional diesel truck, reports Daimler Trucks.

MFTBC says Fuso engineers are already working on the next generation of the Canter E-Cell. The company has about 3 500 hybrid trucks in service around the world.