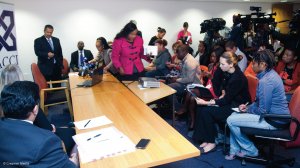 Outgoing Eskom CEO Brian Dames reported on Tuesday that the utility was considering restarting some of the energy-saving programmes that were suspended in late 2013 as a result of funding constraints.

Speaking at a briefing hosted by the South African Chamber of Commerce and Industry, Dames said he had requested the integrated demand management (IDM) unit to prepare a proposal for board for approval.

The approach was likely to be similar to the one taken to extend short-term electricity purchases from independent power producers (IPPs) until May, whereby Eskom was buying the power “at risk” after having failed to receive regulatory sanction to do so.

The National Energy Regulator of South Africa (Nersa) did not cater for Eskom’s full IPP procurement and demand-side management requests when granting it yearly increases of 8% for the five-year period from April 1, 2013 to March 31, 2018.

However, Eskom was of the view that the IPP and IDM purchases could be considered “prudent” in light of their ability to offset the use of expensive open-cycle gas-turbine generation. It would, thus, probably seek to claw back these unfunded expenses under the Regulatory Clearing Account.

However, it had also warned that it would not be in a position to pursue either programme indefinitely and was, thus, in talks with government to secure longer-term resources.

In October, Eskom took the market unawares by terminating its Standard Offer, Standard Product and ESCo Model IDM programmes, owing to what it described as “severe” funding constraints.

The utility justified the suspension by pointing out that it had been left with a R7.9-billion shortfall, after Nersa granted IDM funding of R5.18-billion compared with the R13.09-billion sought.

However, in light of the 14-hour load-shedding episode of March 6 Eskom was keen to push ahead with “aggressive” demand-side interventions.

Dames said the scheme could contribute part of the 10% in sustainable savings currently needed to stabilise the system ahead of the introduction of major additional capacity from the Medupi and Kusile power stations.